Why we joined the team: The Cook Family

With the 5th annual Coach To Cure MD right around the corner on September 29, 2012, we wanted to tell you why you should make this the year you get in the game and show your support for one of the biggest national awareness campaigns in the Duchenne community. And we wanted you to hear it from families that have participated since the beginning... Here's why the Cook Family joined the team! 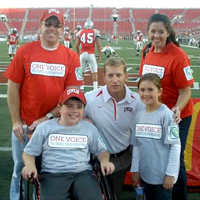 ... Because of the experience.
The Cook Family

Why are you on the team?

The Cook Family is on the Coach to Cure MD team because we are avid Alabama football fans who truly believe that the strength of College and High School Football Teams across the USA can provide the much needed increase in awareness and funds to help fight Duchenne muscular dystrophy.

How does your family participate?

We joined the Coach to Cure MD team in September, 2008, a year after our son's diagnosis on September 11, 2007. Our first two years, we participated by hosting the game at our home with family and friends and at a local restaurant.

In 2010, Wil was acknowledged as an honorary guest and conducted the coin toss at the UNLV Coach to Cure MD game in Las Vegas, NV. Wil's grandfather also joined the cause via texting, phone calls, and face to face conversations which led to over $10,000 in donations.

In 2011, Wil conducted the coin toss at the Azusa Pacific University Coach to Cure MD game in Azusa, CA (southern cal). Wil was also invited to join the Irvine High School Football team as an honorary member, wearing jersey #65. The team's Booster Club were clad in Coach to Cure MD shirts and wristbands for the game and Wil again tossed the coin at the start of the game! He has captured the hearts of all of the players, coaches, families, and fans.

Who is the special person you're fighting for? 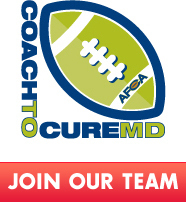