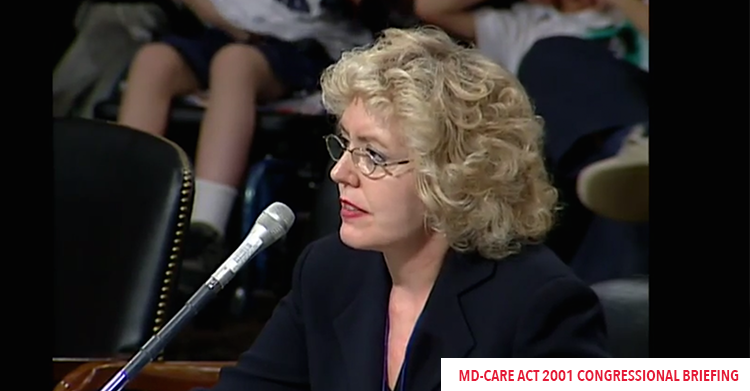 I remember a conversation with Joel Wood, President and Founder of The Foundation to Eradicate Duchenne (FED), just outside the first-ever NIH workshop on Duchenne: “You mean NIH has no investment in Duchenne?” This statement followed by frustration, anger, sadness, the exact words a bit too colorful to quote. Then House member Roger Wicker, “Let’s write us up a bill…” and Senator Arlen Specter’s “Yes, we can do a Hearing…”, and Joel Wood (to Annie Kennedy who was at MDA at the time), “Annie can you fill the room?” And then, on the day of the Hearing, the late Senator Wellstone, one of the most liberal members of Congress said, “I never agree with Senator Spector on any issues, but on this legislation, I am in full agreement!”

And as we sat together, we asked ourselves “Does this bill reflect what is needed? Have we done our homework? Will we have sufficient support? Will it pass?” We knew the consequences of doing nothing. That part was crystal clear.

I wanted to take a moment and turn to my colleagues, war buddies, friends to share some of their memories of this historic, game-changing moment in Duchenne. 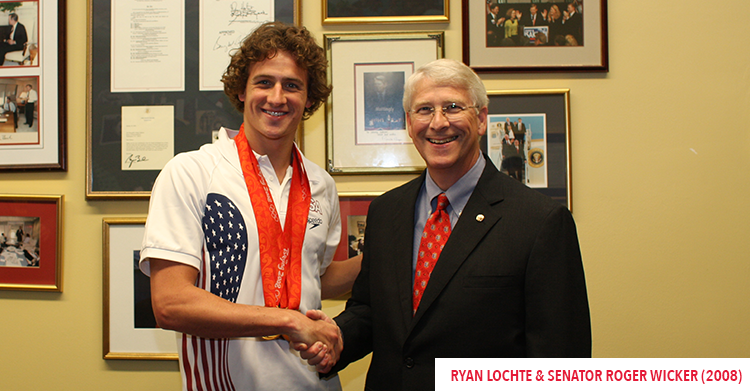 Joel Wood. You know him as a fierce advocate for our children and from FED. I love his memories leading up to the passage of the MD-CARE Act:

"When I think of the MD-CARE Act, I think of two nights -- early in the process and late. The early one was the night that then-Congressman Wicker dropped the bill in the House hopper. Everyone had told us that Congress wasn't going to pass a disease-specific bill that NIH didn't like, but that if we got a bunch of cosponsors and proved ourselves annoying enough, whenever a more comprehensive bill for NIH funding was moving through, we might be able to hitch a ride. On that first day, I called in a bunch of lobbying chits. Congressman Wicker dropped the bill and went back to his office, where his legislative assistant Jim Perry told him they'd already had about 30 offices calling to cosponsor. Roger was impressed, and decided it would be fun to go back to the floor and hustle more cosponsors. At the end of that first day of the bill's introduction, we had 92 cosponsors. It was the first time we felt that perhaps we could actually pass this thing. (By the time Wicker passed the bill in the House, he had hustled more than 320 cosponsors out of the 435 Members of Congress.)

"The second memory was getting a call from Senator Paul Wellstone, on a night when I was at a Republican fundraising dinner. One of the most ironic scenarios I've been in. I excuse myself from the bleeding slabs of red meat, and bottles of expensive wine, and cigars, and Democrat-bashing, to take the call from the Senate's most liberal member. He was giddy with excitement, that he'd gotten the bill on a "hotline" and confirmed that no one would object -- we would soon see the MD-CARE Act signed into law. I reported back to all my right-wing friends, who were a little confused as to my affection for the liberal Democrat from Minnesota." 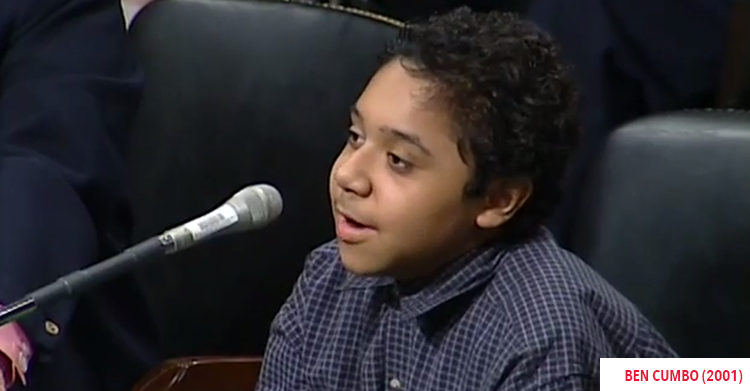 PPMD’s new Senior Vice President of Legislation & Public Policy, Annie Kennedy, who led MDA’s advocacy initiative for years, captures the emotion and electricity of that day in the hearing room:

“You have to swear to me that you will fill the Senate gallery if we get a hearing.” As Pat mentioned, those were Joel Wood’s words to me just a few weeks prior to the day that I stood in a packed hearing room of the U.S. Senate. I had no doubt we could fill that hearing room. While ‘lobbying’ Capitol Hill lawmakers may not have been something our community was yet known for, we were a mighty and organized community – and after February 27, 2001 we would always be known as one of the most powerful patient-advocacy communities in the nation.

"But the real power for me that day came through witnessing individual transformations, unscripted moments, and seeing segments of our community come together as one.

"There was the moment when Senator Arlen Specter (R-PA) who was presiding over the Hearing paused the proceedings and invited all of the kids in the room to come forward to fill in any of the empty seats of the HELP Committee Members. Within moments, our boys and men were seated in positions of authority alongside members of the U.S. Senate.

"Or the moment when, going off-script, Senator Specter began asking 13-year old Ben Cumbo what it was that he hoped for. His responses included a girlfriend, a career as a military pilot, and a hope that the government would increase spending on muscular dystrophy research by asking, "If you can spend $2 billion on a single plane, don't you think you can spend $100 million on muscular dystrophy?" The room roared with applause.

"And as I stood there in the back of the room that day, I surveyed the crowd. Dozens of researchers from several MD-focused labs in the DC area, all of the team members from the MDA Clinics in DC and Maryland, families representing all muscular dystrophy communities, an entire bus chartered from New York bringing the cast of PPMD’s ‘Kids for Kids’ production, members of the Duchenne community from countless states, camp volunteers, friends, and a few people who squeezed in the door at the last moment just to witness history in the making. That February day proved, without a doubt, that we are stronger together."

Yes, we stood in that hearing room together as people who wanted change, who believed that by an increased investment in muscular dystrophy, we would see an acceleration in research, an expansion of research opportunities, and improvements in the quality of lives of people with living with Duchenne and other muscular dystrophies. And in December 2001 we celebrated! The MD-CARE Act was now law, but we had no idea what would happen next, what the investment would look like or how long it would take. We simply stood together and believed. 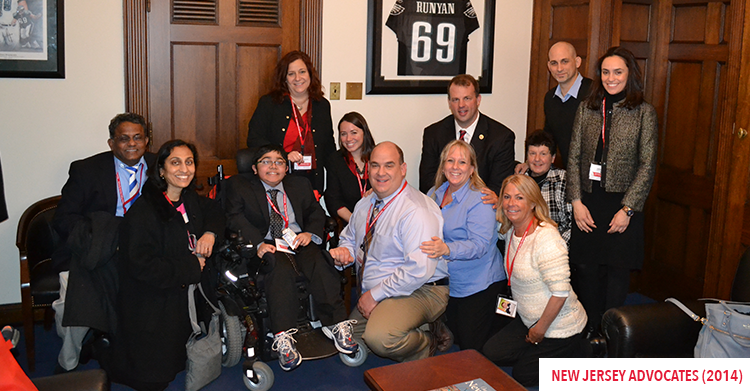 14 years later, we are able to confirm. This legislation galvanized research, incentivized industry, improved care, and changed our world.

And what about the young men who attended that hearing all those years ago? Annie tells us:

"14 years later, those boys who filled those Senators seats have now grown. Many have gone to college, interned in Washington, and dreamed big dreams. But they have also aged into an adulthood that includes significant resource barriers and medical complications. Today’s bill works to deliver futures to the boys who once filled that gallery by expanding cardiac and pulmonary research efforts, and promoting independence for adults with muscular dystrophy.

"And Ben? Well, Ben is thriving at 27. Having interned in Obama’s Senate office, and then in the White House, and near completion of his Master’s degree, diplomacy has come in handy. And – well – he’s still seeking the perfect girlfriend.

"We’re still pushing towards a $100 million funding level for muscular dystrophy. But at $75 million and having seen some of Ben’s Facebook posts recently, I’m optimistic that we’re getting close on both counts. Our appropriations efforts this year will be focused on getting up to that $100 million milestone."

We can’t ignore the enormity of our accomplishment as a community. What will be one of our highlights of 2014? Annie adds:

"Earlier this year, the government shut down completely for 16 days, federal budgets were slashed, and the Affordable Care Act yielded a political polarization that had lawmakers nervous about engaging in anything that seemed to touch ‘health care’. But, we passed the Paul D. Wellstone MD-CARE Amendments Act of 2014 anyway. Yes, it’s true. We are stronger together. I can’t wait to see what this amazing community does together next."

And today we are grateful to our champions and to a Congress that has gotten this exactly right. Joel writes:

"So, it gets done and things do change -- though Lord knows we need more, better, faster. If these many developments over the past 14 years don't play out for this generation of young men with DMD, we will have failed. We have so much work ahead, but I am filled with gratitude for the many in Congress, led by Sen. Wicker, who have tried so hard to help. And I miss Paul Wellstone a lot."

Sometimes it is worth taking a moment to reflect so that as we continue to plan ahead we can learn from not only our mistakes, but our victories. Our advocacy initiatives continue to grow – and we won’t slow down. We can’t. And we hope you’ll join us as we continue to use our voice in D.C.

We deserve this moment to celebrate as a community and use this momentum to recharge our batteries and continue rewriting history until we end Duchenne.

What are your memories of the passage of the MD-CARE Act in 2001, the reauthorization in 2008, or the most-recent passing of the MD-CARE Act Amendments? Any stories you’d like to share or hopes you have for the updated legislation?

I celebrate the passage of the MD Care Act twice a year when a inform a young group of nursing students at Western Michigan University what it is like for my son Benjamin at age 28 with DMD.  We will never forget all of the hard work that went into passing that bill and will continue to support PPMD in its efforts to find a cure for our disease.  We also know that we helped pass that bill by going to Washington DC and telling our story to Senator Debbie Stabenow, Senator Levin's health care assistant and Representative Fred Upton.  So grateful are we as a family to have these great human beings on our side.