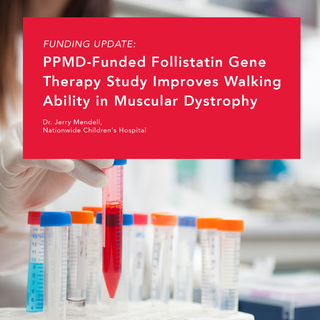 Dr. Jerry Mendell of Nationwide Children’s Research Institute recently presented data from a ground-breaking PPMD-funded study demonstrating that a modified virus carrying the gene for follistatin can improve performance on the 6 minute walk test in study participants with Becker muscular dystrophy. This is the first time a gene therapy has demonstrated an improvement in function in a muscular dystrophy.

Previously, animal studies demonstrated that a molecule called follistatin could be used to block myostatin in the muscles, leading to increased muscle size and strength, even in mice that lacked dystrophin. For the clinical study, Dr. Mendell and colleagues injected the modified virus into 12 places in the quadriceps muscle in 6 men with Becker muscular dystrophy, where it entered the muscle cells and allowed those cells to make and secrete follistatin. The investigators chose to start with Becker muscular dystrophy because those with BMD have significantly weak quadriceps muscles compared to the surrounding leg muscles and improving quad strength should lead to improved walking abilitly. The participants were all over 18 years of age and had to be able to complete the 6 minute timed walk. The first three participants received a low dose of gene therapy and the second three participants received a higher dose.

As always, PPMD will keep you up to date on the next steps in this exciting research.

i am interested in this study for my son