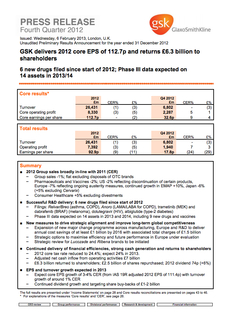 GSK recently announced in their Q4 2012 results that the Phase IIB drisapersen study results are in-house, but not yet disclosed in an effort to prevent introducing bias into the ongoing and overlapping Phase III study. Presentation of the Phase IIB results are planned for a congress in 2013.

You can find more information regarding the ongoing clinical studies involving drisapersen by visiting ClinicalTrials.gov.

Other recent updates from GSK

Drisapersen (previously GSK2402968) consists of short pieces of DNA called “antisense oligonucleotides” or “AONs” that are being tested for their ability to convert deletions near Exon 51 in the dystrophin gene from non-functional “out-of-frame” deletions to more functional “in-frame” deletions, such as those typically seen in boys and men with Becker muscular dystrophy. The strategy is commonly called “exon-skipping”.