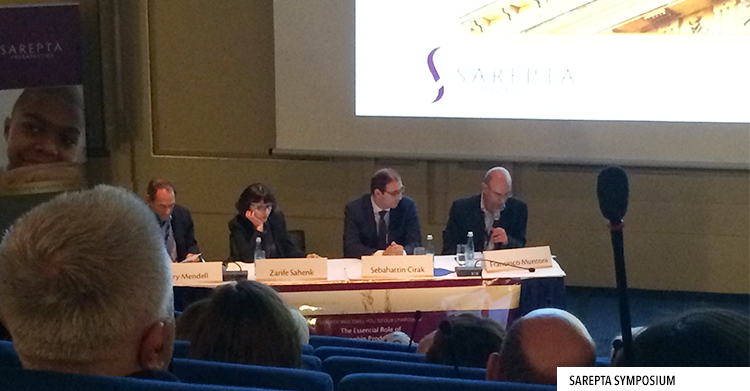 Sarepta held a symposium on the role of dystrophin production in disease-modifying treatments for Duchenne. Some highlights:

We heard from Dr. Francesco Muntoni from the Dubowitz Neuromuscular Centre about how much dystrophin is expected to be needed to stabilize the muscles and result in features that are like Becker muscular dystrophy (which is the goal of exon skipping drugs). He described a 20% dystrophin production as a reasonable target but also discussed the variability seen in Becker muscular dystrophy, and that some children with Duchenne who get benefit from exon skipping drugs may respond like a mild Becker and some like a more severe Becker.

Dr. Jerry Mendell from Ohio State provided an overview of the eteplirsen clinical program. He reviewed the biopsy data quantifying dystrophin production (dystrophin production was the primary endpoint), the walk data (the 6-minute walk test was the primary clinical endpoint), and the pulmonary data. The pulmonary data was particularly interesting since Dr. Mendell presented the 144 week data in all 12 patients, which showed a plateau of pulmonary function tests from baseline, showing that the children’s pulmonary status has remained stable over the 144 weeks.

There were a few interesting questions from the audience. One was about the ability of eteplirsen to get into the heart or brain. Eteplirsen cannot do that, and for exon skipping drugs to get to the heart or brain would require some changes to the molecule so it could get into those areas. There was also a question about the ability of muscles that already have a lot of fat and fibrosis to have significant treatment effect, with general agreement that the uptake of exon skipping drugs would be expected to be lower in muscles with more fat and fibrosis. 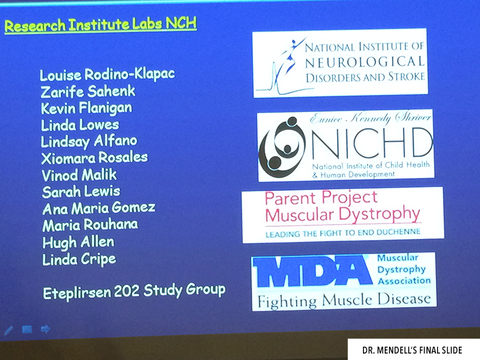 There were several interesting posters about Becker muscular dystrophy. Leiden University Medical Centre had several posters; one was about the importance of genetic testing using updated technologies to confirm the diagnosis and differentiate from other forms of muscle disease (Straathof and colleagues). Another described the use of muscle function testing and MRI in differentiating Becker from limb girdle muscular dystrophy (LGMD), which can look pretty similar. The authors (Wokke and colleagues) show that hip flexor muscles are less affected compared to other muscle groups, both on clinical testing and MRI, and this is not true of LGMD. Finally, van der Bergen and colleagues described a new clinical scale for Becker based on age at reaching 5 milestones; scoring on the scale was highly correlated with muscle strength tests. The goal is to identify a Becker-specific clinical measure to compare the disease among patients.

Dr. Brenda Wong from Cincinnati presented data about the clinical features of patients with Becker muscular dystrophy based on their mutation type. This helps understand what to expect for Becker patients, and also gives more information about what the outcome might be for patients with Duchenne who have exon skipping for different exons. Her group described clinical characteristics, MRI data, and bone and heart health. They will continue to follow this group over time so our understanding of clinical features and progression will grow.

Groups from Cincinnati (Dr. Tian and colleagues) and Dubowitz Neuromuscular Centre/Newcastle (Dr. Sarkozy) both presented posters on the use of bisphosphonate therapy in people with Duchenne on steroids to protect bone health. Newcastle described the use of bisphosphonates prophylactically (that is, before there were signs of bone density problems). In both cases the treatment was found to provide some protection to bone health. The Newcastle group found higher rates of side effects and patients who could not tolerate the treatment than found in the Cincinnati group. Dr. Wong spoke to me about the importance of educating patients and their families about taking bisphosphonates correctly to reduce the chance for unpleasant side effects.

Dr. Wein from Nationwide Children’s Research Institute presented data about use of “out-of-frame exon skipping” to take advantage of a naturally occurring beneficial piece of DNA in exon 5. This therapy is relevant to the ~6% of patients with mutations that occur before exon 5 in the dystrophin gene. Exon 5 contains an important element called IRES that allows the ribosome to still do its job in the process of making dystrophin protein. The idea is to use “out of frame exon skipping” of exon 2, which disrupts the reading frame, to force the activation of the IRES in exon 5. In mice this causes some dystrophin to be produced and results in some improvement in muscle force and strength. This might lead to a new way to approach treatment for patients with mutations up to exon 5, and also adds to our knowledge about the way the DMD gene works.

As exon 51 trials continue to progress and Exons 53 and 45 are queued up, investigators are starting to look for more practical ways to address larger groups of mutations at once—an efficient solution for those mutations that are less common. Judith van Deutekom of Prosensa Therapeutics reported on a PPMD-funded project to develop a multi-exon skip with a single set of antisense oligonucleotides in the exon 10-40 region. A skip of even this many exons is predicted to produce an outcome that is more like Becker muscular dystrophy and would be applicable to about 15% of those with Duchenne. So far Dr. van Deutekom has been able to demonstate that the technique works in human cells from those with Duchenne and, with the PPMD funding, is planning to test the oligos in mice before moving to human studies.

A Peak at New Compounds

Clinical trials are underway or planned for potential Duchenne treatments including the exon skipping trials from Sarepta and Prosensa, Eli Lilly’s Tadalafil trial, PTC Therapeutics’ phase III Translarna® trial, Pfizer’s anti-myostatin study and many others. As these trials progress, researchers continue to fill the beginning of the pipeline with tomorrow’s Duchenne drugs. For example, several posters showed promising data for new drugs such as the one from Osaka Bioscience Institute, which described beneficial effects of “a novel inhibitor of hematopoietic prostaglandin D synthase” that increased the activity of mice that lack dystrophin and decreased evidence of damage to their muscle cells. Another, from Annemaria De Luca of the University of Bari in Italy demonstrated that a compound from the company Armgo, called rycal®, helped control leaky calcium channels in mice that lack dystrophin and improved the physical function of the mice.  Finally, a poster presented by H.M. Ismail, from the University of Geneva discussed the ability of a compound called diapocynin, which may inhibit an enzyme responsible for free radical production and other damaging effects, improved the ability of mice that lack dystrophin to run on a treadmill.

British company Summit PLC, which has a compound (SMCT-1100) in phase Ib studies that upregulates dystrophin’s molecular cousin utrophin, presented data on its next generation of utrophin upregulating compounds. The new compounds in development show better absorption profiles than SMCT-1100 and produce up to a 1.6 fold increase in utrophin levels and showed protective effects in the heart and diaphragm muscles of mice that lack dystrophin.

The original group of 12 boys who participated in the first Prosensa study of Drisapersen have now been on the drug for 188 weeks (about 3 ½ years). As of the last formal evaluation at 177 weeks, 5 of the original 12 either improved or showed no change in their six minute walk times. The two boys who improved were walking as much as 140 meters further than they did at the time of the baseline measurements 3 ½ years ago.