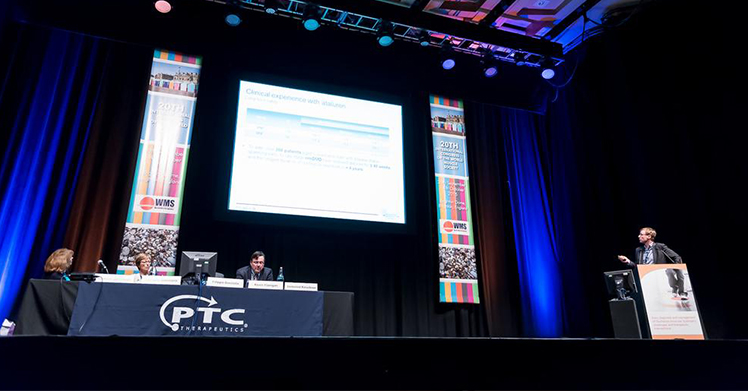 Dr. John Porter and Kathi Kinnett from the PPMD team recently attended the World Muscle Society (WMS) meeting in Brighton, UK and will be reporting back over the next couple of days. Click here to read notes from Day 1.

PTC held their symposium, which featured an amazing presentation by Fillippo Bucella, who described the patient experience and burden of clinical trial participation. While not an unfamiliar story to our community, industry and science occasionally need to be reminded about who all of this is for and how much families are sacrifice to further scientific research and the development of new therapies. Bravo Filippo! Amazing presentation. TREAT-NMD and CINRG discussed the development of their post-marketing registry effort now working in collaboration with Translarna (the Translarna post-marketing registry project is called “STRIDE”). The goals of this project are to collect expanded evidence beyond trials and into clinical practice and secure a broader understanding of real world safety. Kevin Flanigan discussed the importance of newborn screening and applauded PPMD’s efforts in continuing to invest in this important effort. Translarna has been approved by the EMA, but is still seeking approval in individual countries (such as the UK). But an excellent first step.

Biomarin also presented a symposium, highlighting their two phase 2 and one phase 3 studies of drisapersen. The long-term data includes 12 boys who have been on this drug, now, for 6 years (18 weeks of drug, 8 week drug holiday, 8 weeks of drug, 8 week holiday, then 177 weeks of drug). Of those 12 boys, 9 boys started with 6 minute walk test distances of above 250 meters, and 3 below. Of the 9 boys who started above, all have increased their distance in the 6mtw. Of the 3 who started out <250 meters, 1 has maintained his distance and 2 have had loss of ambulation. Adverse effects seen include injection site reactions and inflammation, but no one withdrew from the study. Evidence of microglobinuria and proteinuria resolved after intermittent drug holidays. As we know, Biomarin and Sarepta are awaiting word from the FDA, and are awaiting anticipated dates for Advisory Committee meetings later this fall. PPMD will continue to support both companies however we can for these Advisory Committee meetings.

Overview of Morbidity, Mortality, and Survival in Duchenne Muscular Dystrophy in the North East of England. The Newcastle group presented data on morbidity and mortality, noting that risk factors for premature death included malnutrition, depression, failing to attend appointments and delays in appropriate care, emphasizing a need for meeting the Standards of care for optimal quality and quantity of life.

Clinical Outcomes in a Large Cohort of Boys and Adolescents with Duchenne Muscular Dystrophy. The Great Ormond Street group examined the records of 310 boys born between 1989-2013 seen over the past 20 years. 93 patients were transitioned to adult services, 26% of which were taking steroids. Cardiomyopathy was found to be the leading cause of death.

Does the Inability to Achieve Plantargrade at the Ankle Joint have an Impact on the Outcome Measures of the 6 Minute Timed Walk Test and Ambulatory assessment; and is this Further Compounded by the Illio-Tibial Band Tightness. Dr. Butler presented results indicate that improved range of motion in the ankles does allow boys to walk farther during the 6 minute timed walk test, however there was little or no relationship between illio-tibial tightness and function/walking. This may have indications for study outcome measures.

A Prospective Natural History Study to Measure Progression of Physical Impairment, Activity Limitation and Quality of Life in Duchenne Muscular Dystrophy. Nathalie Gomens reported on a joint study showing that 7 years of age seems to be a critical age for patients with Duchenne. At >7 y.o., functional status begins to decline, whereas <age 7, functional status remains stable. Previous results of 12 month changes in 6 minute walk tests have indicated that boys who can walk >350 meters have minimal decline; those who can walk <350 meters showed the greatest decline over 12 months. These results suggest that both age and functional status should be considered when designing clinical trials. A better understanding of the longitudinal progression will help to assess the impact of novel Duchenne therapeutics.

Work on Putative Biomarkers and Modifier Genes Continues to Advance

Gene Expression Profiling of Blood in Patients with Duchenne Muscular Dystrophy and Gene Expression (mRNA) and MicroRNA (miRs) Levels in Blood as an Indicator of Disease Progression and Therapeutic Efficacy. Brenda Wong’s lab has evaluated mRNA and miRs in blood of boys that are receiving glucocorticoids vs. those who are glucocorticoid naïve vs. normal controls. The differences they report in mRNA from blood mirror the differences that others have reported in skeletal muscle biopsies, strongly suggesting that blood transcripts can be used as a marker of the muscle response. Blood mRNA and miR profiles were altered by glucocorticoids (data from 28 patients, 3-10 years old). Levels of six miRs were altered in association with glucocorticoid treatment in young boys (five of these miRs showed reduction due to the drugs). Importantly, in comparison to healthy controls, young glucocorticoid naïve patients under-expressed mRNAs and over-expressed miRs that were related to locomotion. Glucocorticoids increased mRNAs and decreased miRs that were associated with glycogen metabolism and glucose transport, suggesting a potential glucocorticoid mechanism that acts to improve muscle function via carbohydrate metabolism. Taken together, the posters from the Cincinnati group suggest the operation of mRNA—miR networks that may provide insights into Duchenne mechanisms, as well as the biological pathways that respond to glucocorticoid treatments.

Micro RNA Profile Associated with the Dystrophin Level in Becker Muscular Dystrophy. In a related study, Francisco Muntoni’s group evaluated the miR profile in skeletal muscle from Becker muscular dystrophy patients. In these studies, the goal was to identify miRs that associated with, and potentially were responsible for, variations in the level of dystrophin expressed in different patients—miRs that associate with high dystrophin levels then may represent new therapeutic targets. Twelve miRs were found to be dysregulated in Becker when compared to normal controls (three of these have been previously reported in a variety of myopathies, suggesting that they are likely to play roles in general muscle pathology, rather than dystrophin regulation). Mi-425 has increased in Becker patients with high dystrophin expression and is known to influence myostatin—thus, mi-425 could be responsible for a better clinical outcome in Becker muscular dystrophy due to its role in myostatin pathways. Becker patients with lower dystrophin levels had higher expression of miR-144 and 451 levels (these two miRs are also seen to increase in sarcopenia, age related muscle loss); thus these miRs also may play a role in the pathogenesis of skeletal muscle. Overall, discovery of miRs that influence pathways important in muscle degeneration, regeneration, and dystrophin levels may represent important new targets for therapy development.

Genetic Polymorphisms Modify Intramuscular Fat Infiltration in Duchenne Muscular Dystrophy. Beth McNally and Kevin Flanigan have previously shown that Duchenne patients with the IAAM allele of the LTBP4 gene show reduced TGF beta signaling and substantial prolongation in time to loss of ambulation over patients with the VTTT allele of LTBP4. Here another multidisciplinary team reported that the IAAM allele is also associated with decreased fat infiltration in skeletal muscle. Identification of this and other modifier genes greatly assists clinical trial design and potentially aids the identification and pursuit of novel strategies to treat Duchenne.

Are Effects of Translarna (Ataluren) on Muscle Strength More Discernable in Younger Patients with Duchenne Muscular Dystrophy (DMD)? Craig McDonald reported findings from PTC’s clinical trials of Translarna that help inform clinical trial design through understanding of the relationship of muscle strength and function to age (< 7 years old vs. > 7 years old). Natural history studies have previously shown that Duchenne boys < 7 have substantial decreases in strength but little change in function when measured over a one year period; boys > 7 have the opposite response. In a myometry study of patients receiving Translarna, showed preservation of muscle strength occurred in the younger age group (this was true for 4 of 5 myometry parameters measured). The key conclusion from this work was that it is essential to select age-appropriate endpoints in the design of clinical trials in order to ensure that the mechanism of action of the drug (and its potential efficacy in Duchenne) is adequately tested.

Eteplirsen, a Phosphorodiamidate Morpholino Oligomer (PMO) for the Treatment of Duchenne Muscular Dystrophy (DMD): Clinical Update. Sarepta reported their latest findings from the eteplirsen study. After 3 years on drug, their cohort shows a 151 m benefit in the six minute walk test and continuation of ambulation for 10/12 patients in the study. Data from the fourth biopsy continued to confirm the exon skipping mechanism, and immunoblotting confirmed dystrophin expression in 82% of patients at week 180 (with statistical significance by both signal intensity and muscle fiber counts).

HT-100: Interim Safety, Pharmacokinetics, and Pharmacodynamic Data in DMD Boys. Akashi Therapeutics reports that HT-100 continues to show a good safety profile and the lowest dose cohort exhibits improved strength over 20-24 months in study and 12 months of continuous dosing. Improved strength was noted in both the ambulant and non-ambulant groups (increase in muscle strength was their most sensitive measure of an early drug response). Muscle strength improvement was accompanied by an increase in muscle function measures.

Small Molecule Compounds that Promote Exon Skipping in the DMD Gene. PTC Therapeutics has developed a drug discovery platform for small molecule compounds designed to promote exon skipping in Duchenne. High Throughput Screening (HTS) assays were developed to identify compounds that could address skipping of exons 44, 45, 51, and 53. PTC has completed HTS for exons 44 and 51 and now is conducting structure-activity relationship studies to optimize lead compounds for these two targets.

Utrophin Modulators Significantly Improve Muscular Dystrophy in the mdx Diaphragm. Oxford University and Summit are collaborating on the development of next generation utrophin upregulation compounds (with intent of improving upon the properties of the Summit C1100 compound currently in clinical development). Thus far, this program has identified two new compounds that increase utrophin expression but also have improved pharmacokinetic profiles. In mdx mice, daily oral administration of these new compounds produces increases in utrophin in skeletal muscle, diaphragm, and heart. These compounds also show rescue of calcium dysregulation and protect against structural muscle damage, including ameliorating necrosis and fibrosis in the mdx diaphragm.