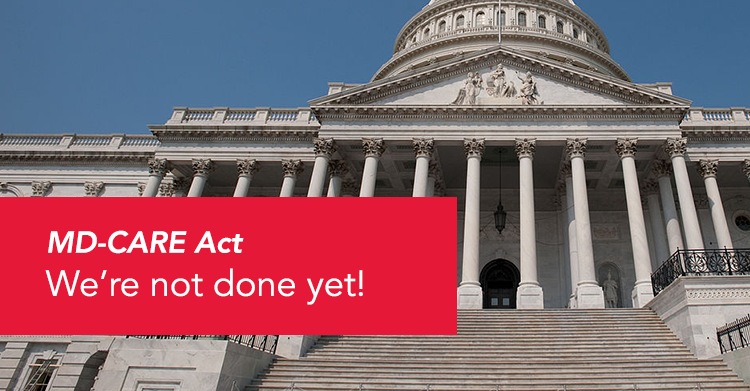 Sure, we’re in the lazy days of summer and Congress is on recess, but now is not the time to slow down on the MD-CARE Act. Let’s keep our momentum going. Take a minute to thank the House for passing the bill and tell the Senate why we need them to take up the legislation this September to do the same!

With election season around the corner, members of the Senate will have a short 2-week window in September to consider passage of the MD-CARE Act (S.315). Each email sent is another voice added to our call for action on the bill. So why reach out during August recess? Congressional staffers will report back to the member on what issues they heard from their constituents during recess.

Here are two simple actions you can take in the month of August to encourage Congress to finish the job on the MD-CARE Amendments once they return this September.

Tell the Senate the responsibility rests in their hands to further the progress made to date by passing the MD-CARE Act Amendments of 2014. This is a bi-partisan bill that works and it is up to them to ensure we keeps pace with the scientific and clinical needs of today and tomorrow, particularly for those with Duchenne and other forms of muscular dystrophy who are now living into adulthood.

Take a minute to tell the US Senate to bring our bill to the floor for a vote and vote YES when they return in September.

We applaud the House for passing the legislation by unanimous voice vote in late July. We need them to reach across the aisle and tell their Senate Colleagues to now do the same.

Take a minute to send a thank you email to your House member and ask them to encourage the Senate to act in September.