This month has been extremely busy!  Jon has fully particated in the senior events this past month leading up to graduation. Senior Ball, Senior Bash and the Senior Convocation Ceremony.  Jon has always had a fighting spirit.  He made a decision early on not to let Duchenne get in his way.  We had an issue with the Convocation Ceremony causing Jon not be able to stand from the seat he was sitting in.  The chairs in the auditorium have moveable seat bottoms, that are not stationary.  As a result of not being able to keep the seat flat he couldn't stand by himself to go up and recieve his award when his name was called.  The presenter couldn't see what was going on so she finished her presentation. I leaned over to my husband and said, "Jon can't get of the chair."  The principal was sitting close to Jon and figured out what was going on. Jon was helped to a standing position and was called up on stage at the end of ceremony to accept his award.

As a result, of this bump in the road, my husband and I met with the high school administrators to discuss graduation preparation.  As we were discussing the preparations. I could hear Pat Moeschen's voice in my head telling a story of a discussion he and his father had regarding using a wheelchair.  "If I'm sitting down I'm disabled, If I'm standing up I'm not."  Jon has a very similiar attitude regarding using a wheelchair.   Jon usually won't use a wheelchair.  As I asked the school administrators questions regarding how the ceremony was going to work, I could hear Pat's voice again in my head describing what his father said  to him regarding the use of the chair "Shut up and just get in the damn chair; we will be able to do a lot more stuff and have a lot more fun on this trip, without you whining and me wanting to destroy you, because you have to rest every 15 minutes."  As a parent, I could relate to Pat's Dad at that moment.

As my husband and I further discussed the details of the ceremony with the school administrators, we decided to come up with a compromise.  Jon would use his wheelchair for the processional, and sit through most of the ceremony.  When it was time for the presenting of diplomas he would be pushed over to the stage area where he could stand and walk accross the stage to receive his diploma and walk back to his chair. We discussed who would push Jon into the ceremony, the administrators said "We won't have a problem finding a teacher, they would all probably fight for the chance; Jon is really a likable guy and he will be missed next year."    When my husband and I came home from the meeting we spoke to Jon regarding the chair.  Jon's reaction was typical, "Mom I can walk in with eveyone else."  I said "Jon there are 350 kids in your graduating class.  You will hold everyone else up during the processional. Do you want to fall in front of 5000 people and have someone lift you up in front of all those people?".  His reply to me was classic Jon,  "OK, I will use the chair, but I don't want my Mom or Dad pushing me, I'm friggen 17."   I said "No problem, we won't be pushing you, one of the teachers will push you over to the stage area and lift you when it's time for you stand."

We scheduled a private rehearsal so Jon could practice walking accross the stage wearing his Cap and Gown.  It went fine without any problems.  We wanted to make sure the gown didn't cause any issues with his gait. My husband went with Jon to the rehersal with all the other kids, so we could make sure that the plan would work and we could show the teacher how to lift Jon.  Both rehersals went fine.   Jon and the school administrators were comfortable with how things worked out.

I asked Jon if he wanted to decorate his chair in the school colors. Jon said "yeah, but I don't want anything too childish and Mom don't go overboard OK." I said "how 'bout the FIRST Robotic team 1511 Rolling Thunder colors". His chair already had red underglow lights on it from other FIRST Robotics team events. He agreed. The arms and the back panel had red camo. On the back panel we put red and black graduation caps. The wheel spokes had red and white streamers threaded through them.

Jon the graduate and his chair were now both ready for graduation.  Graduation went off without a hitch.  When Jon's name was announced he walked accross the stage to a huge cheer from his classmates and the people in attendance!  His classmates showed Jon how much he inspired them.

Jon has a busy summer planned.  Between the medical visits to Toronto, Utah and Gainsville; attending the PPMD conference and attending Double H camp, Jon plans on starting to write his Sci Fi book series and get ready to study Biology at Nazareth College.

Jon like Theodore Roosvelt has always held to the attitude of "Believe you can and you're halfway there." 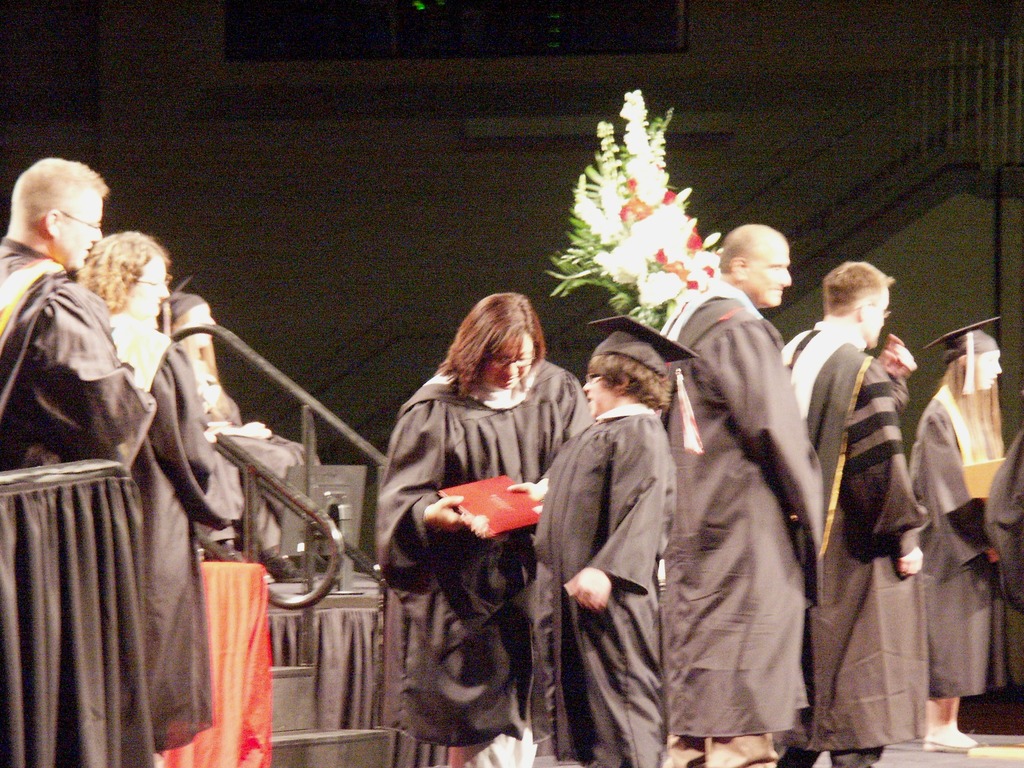 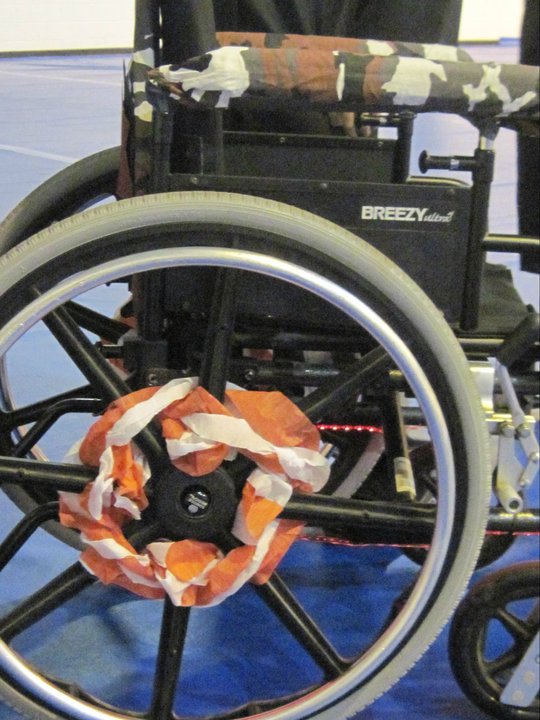 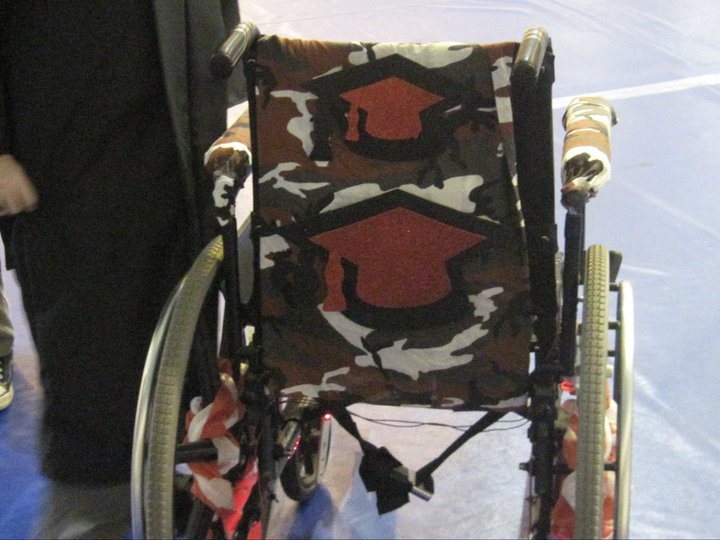 Hi Carrie,  Jon began to use a chair in 2005. It's a manual wheelchair, where he is pushed.  We use it for long distances. We still prefers not to use it. He can't do stairs etc.

Donna - I hope you keep at it with the school board.  Each child is different, when they go off their feet and use the chair full time is entirely dependent on their mutation and their progression of the desease.   Good luck to you.

Comment by Donna on June 28, 2011 at 4:25pm
Thank you for sharing this story.  That is one thing that has been my hope for my son Kyle - to walk across the stage at his high school graduation - he is only going in to the 3rd grade this fall, so we have a long way to go and I definitely don't want these years to fly by.  In addition, I'm a proud school board member who is going to try her hardest to stay on the school board through out these coming years - not only for all of the students - but because as a school board member on the graduation stage, we get to hand our child his or her diploma - what a glorious day that will be - too see him WALK across the stage and hand him his diploma - I wonder if there will be a time limit for hugs????  :-)  Congratulations to your son!!!!

Comment by Carrie Elizabeth Pollard on June 28, 2011 at 12:44pm
Hi Lisa, What wonderful news! I can just imagine your son not wanting you to go 'overboard'. My son is very much the same, not wanting to make too much of a scene.I really hope my son Gabriel will be able to walk to his grad too. He is 9 and just began to crawl up the stairs when he thinks I'm not watching.You are clearly caring, involved parents; Congratulations! p.s. When did Jon begin to use a chair?

Comment by Christine Piacentino on June 27, 2011 at 8:35pm
Hi Lisa,  Thank you for the congratulations.  Jon has lost function, but he does continue to walk.  We hope that Jon's story provides some hope and inspiration to others.

Congratulations to Jon on his graduation! It sounds like everything went well. I can just imagine how great it must have been to see him walk across the stage to receive his diploma.  It is wonderful that he is still able to walk at 17!!

This gives me so much hope for Bradley. I feel it is a miracle that he is still walking at 14. It meant so much that he was still walking for 8th grade graduation. Now my hope is that he can walk across the stage for high school graduation as well.

Thank you for sharing this experience!