I marveled at the very intense expression on my nephews face as I looked at the photos of him running in a track meet. With his lips half curled, caught in a snarling grin I could almost feel the intesity of his attempt to catch up to the runner in front of him. His long sleek limbs stretched in a paused motion, defining his athletic toned muscles. I smiled to myself remembering the clumsy awkward toddler he once was. The…
Continue

Redefining traditions. This year, Tom, my girls, my son-in-law, and I chose to gather in New York City for Thanksgiving. Well, "chose" may be the wrong word. New York City is just logistically easiest. The truth is, we would meet up with our girls in Antarctica if it meant we could be together during the holidays.

Whenever someone asks me how things are with my family I sometimes find myself going into this quasi self preservation state.   It’s as though I have this bubble surrounding me and depending on how large an opening their questions create, more of my world will envelop them.   Maybe “self preservation” is an inaccurate description.  It’s more that I begin this quick assessment of the person asking to determine how much detail I want to provide beyond the cursory “We’re all doing fine”. …

Staff Thought for the week

Like every other profession in the world, there are inside jokes in medicine. Random friends and acquaintances send photos or comic strips characterizing nurses as battle-axes waving syringes or doctors ignoring the patient, calculating their golf game. In other cartoons, women are caricatured over time by the degree their breasts sag.

Today, I received this from a friend:…

My son Patrick and I had plans to go to Columbia, South Carolina this week. It was to be a father-son weekend just hanging out. While participating in the Exon Skipping Trials at Nationwide Children’s Hospital last year his manual wheelchair was damaged. The airlines repaired the chair and in a “goodwill gesture” they also provided two round trip vouchers for us to use at a later date. South Carolina was Patrick’s choice and he had a good reason for wanting to…

My Josiah asked me today if I can remember when he walked. So simple and matter of fact, looking at me while I helped him dress, he waited for my response. I stopped and looked down into his beautiful deep brown eyes. Half afraid where this may be headed with memories of him walking starting to flood my mind, I searched his face for…
Continue

The death of Brady Sherman (14 years old) is heartbreaking and strikes fear in the hearts and minds of every parent of every boy with Duchenne. It is so frightening that the idea of wrapping your son in bubble wrap to protect him or never letting him out of your sight, makes perfect sense.

Today we do not have any concrete answers about Brady. We have some ideas about what happened and have been connecting with experts (pulmonary, cardiology,…

Staff Co-Blog: To Have and Have Not with Duchenne

Co-Blog – The following is a co-blog put together by myself and Ivy Scherbarth, a mother from CO and PPMD’s FACES Coordinator for CO/WY. This is a new project we have started where we will both write on similar topics from two different perspectives, but living in the same world of Duchenne.

To Have and Have Not with Duchenne

At the recent World Muscle Society meeting, which took place in Portugal, a great deal of new data on exon skipping was presented, both on the status of current human clinical trials and on the efforts of investigators to improve the efficiency of the technique by combining exon-skipping with gene and stem cell delivery. Below are a few highlights from the meeting with the caveat that it was impossible to cover every poster and talk.

A teacher in New York was teaching her class about bullying and gave them the following exercise to perform. She had the children take a piece of paper and told them to crumple it up, stomp on it and really mess it up, but do not rip it. Then she had them unfold the paper, smooth it out and look at how scarred and dirty it was. She then told them to tell it they’re sorry. Now even ...though they s… 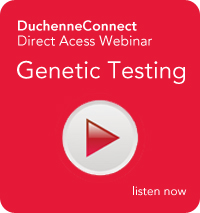 I would like to know if they're are any families who have started their child on the steroid deflazacort? As you may know, this drug is not produced in the U.S. It can only be purchased overseas. Our neuromuscular physician prescribed it for our son who has DMD. I'm just curious if anyone has met any logistical challenges trying to procure this medication. We've met challenges in communicating with the medical facility(faxing). I would also like to know how your child is tolerating the… Continue

trick or treating with Santa

It was three o'clock and I decided to stand outside to wait in my new hot pink beehive wig. Just as I finished adjusting the three plastic black spiders, that cascaded down the sides, I saw the school bus coming. It did not take long for my Josiah to notice. He immediately lifted his head smiling.

I watched as the bus aid began to unbuckle the tie downs that kept his wheelchair in place. His smile widening as I blew him a kiss. Strapped behind Josiah was my middle son Cody. He was…