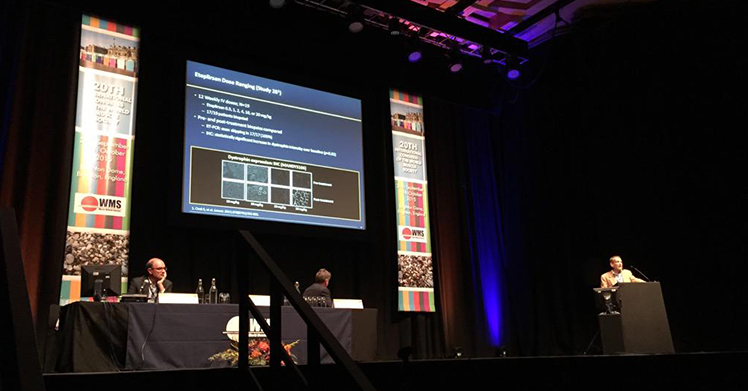 Dr. John Porter and Kathi Kinnett from the PPMD team are attending the World Muscle Society (WMS) meeting in Brighton, UK and will be reporting back over the next couple of days.

Yesterday was a big day for Duchenne at WMS in Brighton, UK. The morning sessions included several talks, and both afternoon poster sessions covered Duchenne gene and imaging, and functional outcome measures, plus the symposium by Sarepta (many of you have already read reports, but we’ll include the highlights below).

There was an interesting talk on estrogen related receptors (ERR) and their potential impact on neuromuscular disease in the mouse model. They investigated several aspects and discovered that with the up-regulation of ERR, there was increased oxidative capacity, increased muscle perfusion, improved muscle pathology, and reduced post-exercise muscle damage. There was no increase in utrophin or restoration of the dystrosarcoglycan complex. By reducing functional ischemia and consequent muscle damage, estrogen related receptors might potentially have an impact in Duchenne.

Dr. Annexstad’s group (Center for Congeneigal Neuromuscular Disorders, Oslo, Norway) studied the longitudinal bone ages of 50 boys, ages 3-16 y/o, looking at the distal (fingers) and proximal (wrist) maturity of the left hand and wrist. They found that there is a discordinance, and that most of the boys had delay in the distal, and pronounced delay in the proximal. Further research is needed to evaluate the impact of this new knowledge

The groups from Nijmegen, Netherlands, and University of California Davis each have posters demonstrating an improved understanding of the determinants of upper extremity function and how best to measure function. Data correlating surface EMG amplitude and muscle force to the Brooke stage (from Nijmegen) and correlations of myometry and PUL with reachable workspace (from Davis) are moving us closer to having a biomarker of upper limb function that will facilitate clinical trials for non-ambulatory patients. Moreover, an understanding of key determinants of arm function (which include level of participation in work or school, corticosteroid use, BMI, and age of diagnosis) helps with design of care and treatment strategies as well as development of robotic devices and arm supports.  The ACTIVE tool (Linda Lowes, Nationwide Children’s Hospital, Columbus, OH) was examined for use in ambulatory, as well as non-ambulatory, patients. All of the tools are looking very good!

Non-invasive biomarkers would allow more regular and accurate monitoring of the efficacy of candidate therapeutics while eliminating the need for invasive (and less accurate) muscle biopsies. Development and qualification of skeletal muscle MRI as a biomarker would represent a tremendous asset for clinical trials in Duchenne. Several presentations (for example, a poster from the Imaging DMD group) addressed MRI as a putative outcome measure, demonstrating that upper extremity imaging is feasible, that progression of muscle changes can be detected much earlier by MRI than current upper limb muscle function studies suggest, and that use of MRI imaging as an outcome measure/biomarker may allow the inclusion of a wider age range of boys in clinical trials. A key finding of these studies is the apparent difference in the progression of Duchenne in lower versus upper extremity, with dystrophic changes in the former and signs of muscle atrophy in the latter. These findings are important in the design of strategies to manage and treat Duchenne. Qualification of MRI as a drug development tool will also require clarification of the relationship between MRI findings, skeletal muscle pathophysiology, and functional measures in clinical trials. Importantly, a poster presenter showed, in a pilot study, that quantitative skeletal muscle MRI could document the effect of drisapersen in Duchenne.

Assessment of early motor development in young boys with Duchenne

Nathalie Goemens presented on the assessment of early motor development in young boys with Duchenne 14 boys, ages 1-7y/o were tested using the Peabody Developmental Motor Scales (2nd edition) and the North Star Ambulatory Assessment (if over age 4yo). Finding demonstrated average scores on grasping and visual motor scales. The lowest scores were observed on the locomotion subscale and the Object Manipulation scale. As we look at interventions in very young patients, identifying feasible outcome measure development will be very important.

The Sarepta symposium shared information from the 192 week, 4th biopsy data, that was also released by the company earlier in the day. As was reported, boys 100% treated with eteplirsen, demonstrated dystrophin in muscle fibers. There was a functional difference found as well: compared with matched, external controls, there was a difference of 151 meters on the 6 minute timed walk test, and continued to maintain that advantage through 192 weeks. In addition, none of the boys had a loss of ambulation during the trial. Forced vital capacity, maximum inspiratory and expiratory pressures remained stable in all treated patients, demonstrating continued pulmonary function. Cardiac function was evaluated by echo and remained stable; cardiac MRI was not done, and there was no information provided regarding cardiac fibrosis. There was a question regarding the role of exon skipping in combination therapy and the need for this assessment in the future.