Over the last year, we have been telling you about the 21st Century Cures Initiative, a comprehensive look launched by Congress to explore what could be done to accelerate the pace of cures in American therapeutic development. Congress examined the entire pipeline, from discovery to development, to how therapies are ultimately delivered to patients. To do this, Congress has been engaging all stakeholders to identify where the existing gaps are in the pipeline, and then to seek input on how to close the gaps between advancements in scientific knowledge about potential cures and treatments, and the regulatory path of approvals for those cures and treatments. And, all along the way, Duchenne has had a prominent place at the table. PPMD was instrumental in crafting and influencing H.R. 6, the 21 Century Cures bill currently being considered by the House of Representatives — with a similar effort now beginning in the U.S. Senate under the name, the Innovation Initiative.

We believe there are many provisions in H.R. 6, the 21 Century Cures bill that could greatly improve the discovery and delivery of treatments and cures to families living with Duchenne, including the Patient Focused Drug Development provision (PFDD), Precision Medicine provisions that include language about genetically targeted platform technologies and follow-on therapies, $10 billion in additional mandatory funding for the National Institutes of Health, and $550 million in additional mandatory funding for the Food and Drug Administration. 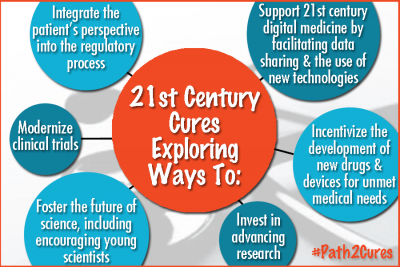 Please help us to ensure that this bill becomes law — and that these groundbreaking proposals create the landscape change they’re intended to — by reaching out to your congressman (member of the U.S. House of Representatives) and letting him/her know that H.R. 6 matters to you and your family. It is time for cures.

Click below to read two of the latest letters PPMD has submitted to Congressional leaders around the 21st Century Cures Initiative: