"My goal is to be like Danica Patrick," Holbrook said. "If I could ever get to some type of celebrity status in my racing career, I could help raise money for Duchenne muscular dystrophy."

Holbrook and her sponsors — K&N Filters, Lucas Oil and Wine Country Motorsports — never have a goal amount when fundraising, she said.

However, Pro Racing World Challenge Series for the Grand Prix of St. Petersburg held by the Sports Car Club of America, will be her first opportunity to raise $10,000.

Parent Project Muscular Dystrophy is the only nonprofit organization that directly benefits finding a cure, she said.

She also said she chose the organization because they understood her vision for combining racing with fundraising and awareness.

"Shea is amazing and I think every boy in the world loves cars and racing. When she approached me, I was thrilled," said Pat Furlong, CEO and president of Parent Project Muscular Dystrophy. "Racing and fundraising seemed a perfect match."

Holbrook said she has a deeper connection with the disease because of her cousins, Jordan and Matthew, who have been affected by the disease. Matthew was the same age as Holbrook when he succumbed to the disease in 2008.

"Matthew's death made me realize I wanted to do something about it. I knew if I could do something for Jordan my family would be really proud," she said.

"When your son is catastrophically ill, it is easy to feel isolated and alone, that very few people in the world understand.  Shea's interest changes everything for her family and for all of us. She is a bright light," Furlong said.

Duchenne is the predominant and most common type of muscular dystrophy and the most common lethal diagnosis of childhood, Furlong said. 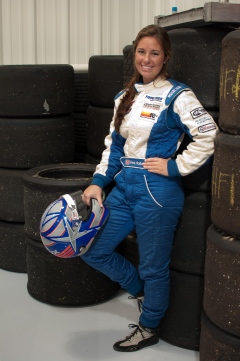 "Until there is a treatment/cure for this disease I will never see Duchenne any differently. The organizations that are raising money to support research are what gives those families affected by Duchenne hope," Gwen Klapp, Holbrook's aunt, said "Shea wanting to raise awareness through her racing gives us hope. I know that her cousin, [Klapp's son] Matthew would be very proud of her. Matt's brothers sure are."

Duchenne is a disease few people know about but is rapidly growing in the United States, Holbrook said.

Eventually, young boys, the only ones affected, will lose strength in their legs. Then one day they won't be able to move and the disease will start to take their life, she said.

"It's a humbling disease because I don't think twice about getting out of bed but they have to," Holbrook said.

"PPMD's approach is based on the word RACE (research, advocacy, care, education).  Shea's RACE is our RACE," Furlong said. "Her enthusiasm, commitment and dedication have helped PPMD accelerate research and treatment.   Shea and PPMD are racing together toward the finish line."

Her interest in racing began when she went on the drive-along at the Richard Petty Experience in Daytona. Though she started her professional racing career from the bottom up, only having funding from friends and family, Holbrook gained sponsors in 2010 who will continue to fund her, she said.

"I started to excel at a rate nobody saw coming, not even me. I had that natural feel. I never felt afraid or scared; it was just in my blood," Holbrook said. "After two years of racing, people would come up to me and tell me I should go pro. I thought, ‘No way!', but once I realized I had enough talent, I thought, ‘I can do this' and 2010 was my debut for professional racing."

She said she has always been competitive and was a nationally ranked water skier before she began racing as a hobby with her father.

Holbrook believes it takes an adrenaline junkie to love racing and that once a person starts racing they begin to crave the need for speed.

"I was impressed immediately by how she handled herself at the track. It was not only about the racing, but that most of her extended family was there watching her race, many of us for the first time," Klapp said. "There were also several other families there with boys who have Duchenne. I immediately noticed her grace and poise. I was very proud of her."

Holbrook says it is hard to balance racing and being a student, but that like raising money for Duchenne and racing professionally, graduating with a degree is a goal she intends to accomplish.