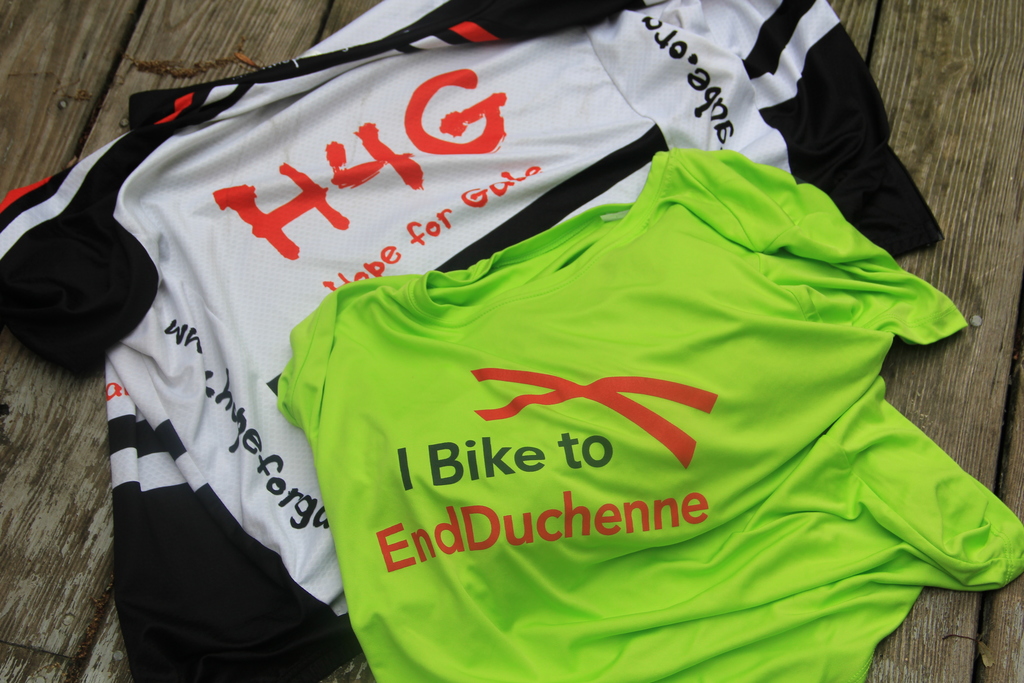 On July 30th, I joined the Ride4Gabe Team for the second leg of their eleven-day trek which started in Houlton, Maine and ends in Mobile, Alabama.  Representing Parent Project Muscular Dystrophy (PPMD) and as the father of two sons who have Duchenne muscular dystrophy, I rode 150-miles of the day’s 213-mile route.   By every measure, it was a great experience.

The Ride4Gabe is the awareness and fundraising arm for the Hope4Gabe Foundation started by Scott and Traci Griffin on behalf of their son Gabe who has Duchenne muscular dystrophy.  My participation was reflective of PPMD’s long history of collaborating with other organizations that share similar goals.   These partnerships may be broad, such as developing the www.childmuscleweakness.org neuromuscular screening tool and working with many rare disease advocacy groups to help pass the 21st Century Cures legislation or more specific, like joining other DMD organizations to promote the recent FDA Advisory Committee meetings.  The Ride4Gabe was another opportunity for PPMD to join another organization to raise awareness for Duchenne muscular dystrophy.   With the team beginning in Maine and being a cyclist, it was a perfect fit for me to bridge these two groups.

My son Patrick drove me to the central Maine campground Friday night where the riders and their support team were staying.   Cyclists, Michael Staley, Wes Bates and Payne Griffin were still out riding when we arrived, yet Scott Griffin and his son Gabe were able to meet Patrick before he left for home.   Once the group returned, they had dinner and we talked about the next day’s plans before turning in for a short night’s rest.   We were all up around 4:30 AM and the cyclists were driven to the start beginning in Lewiston.   It was a sunny and mild day, so the miles slipped by easily.

We stopped in Portland for a short ‘meet and greet’ with Maine’s MDA Goodwill Ambassador and his father and spoke with a reporter from a local newspaper.  The first half of the route was on familiar roads.  Entering New Hampshire was not only new territory for the rest of the team, but for me as well.  The next stop was at the Children’s Museum in Dover, NH where several families toured the museum with Gabe and Scott while we rode.  We arrived an hour later to applause and spent a half hour chatting with the families.   At the museum we also picked up a fifth rider.   Mark Becker, whose teen aged son has Duchenne muscular dystrophy joined the group as we continued west.

Over the miles we talked about how muscular dystrophy affected our lives.   The riders, all friends with the Griffin family, wanted to learn how we dealt with the changes, how our sons coped with transitioning from walking to needing a wheelchair and every topic in between.   I even shared our experiences with Matthew and the impact of his loss on Alice, Patrick and me.   The raising awareness component was more intimate among cyclists.

Our last planned stop was in Manchester, NH and the ride’s organizer, Michael Staley suggested Mark and I speak about what this ride meant to us.  In the short segment we attempted to convey our appreciation for their efforts despite not being directly affected by muscular dystrophy.  I hope that message was clear as well as how much we admired all three riders and their support team for working so hard to help Gabe and every other person living with Duchenne muscular dystrophy.

We left Manchester and continued towards the western part of the state.  The Ride4Gabe Team would finish the day’s ride in Vermont, yet having to ride back east and due to other family obligations, Mark and I left the group in New Boston, NH.   As the group continued on, I waited for Patrick and Alice to pick me up in a parking lot.  The Ride4Gabe cyclists had expressed a desire to meet Patrick having missed him the prior evening.  Patrick drove along the route to catch the group and each of them rode alongside his van to chat for a few minutes with Patrick and hang on to the car for a welcome tow.   After we said final ‘goodbyes’ Patrick turned around to drive back into Maine.

Collaboration and finding mutually beneficial ways to help one another.  That was the lesson I got from the journey.  I’m glad I was able to participate on behalf of PPMD and know that helped strengthen the relationship with the Griffins and the Hope4Gabe Foundation.   Together we make a difference.