A recent PPMD-funded study at Cedars Sinai Medical Center in Los Angeles (published in the May 7, 2014, online issue of Neurology®) demonstrates that those with Duchenne have impaired circulation in their muscles, which may contribute to muscle weakness, and that the approved vasodilator tadalafil can restore that circulation to normal levels.

Based on the results of this study, Eli Lilly has begun a Phase III study to determine if tadalafil, a drug typically prescribed for erectile dysfunction or increased pressure in the arteries, can slow the progression of Duchenne. See ClinicalTrials.gov for more information about participating in the Lilly study. If tadalafil proves successful in slowing the progression of the disease it may be a good candidate to combine with other types of therapy that are mutation-specific or target other consequences of the loss of dystrophin in muscle cells.

More information can be found in the press release included below. 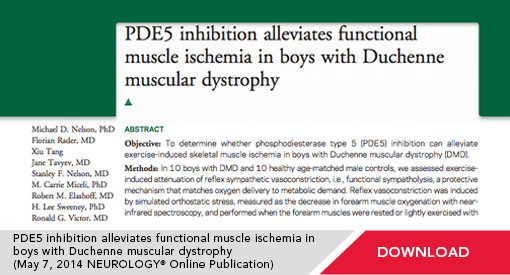 Press Release from NEUROLOGY® Online Publication, the medical journal of the American Academy of Neurology:

MINNEAPOLIS – A drug typically prescribed for erectile dysfunction or increased pressure in the arteries may help improve blood flow in the muscles of boys with Duchenne muscular dystrophy, according to a study published in the May 7, 2014, online issue of Neurology®, the medical journal of the American Academy of Neurology.

Duchenne muscular dystrophy is a progressive and fatal muscle disease affecting boys and young men that causes loss of muscle function. There is no specific treatment for the disease, which is genetic. Corticosteroids can slow muscle degeneration and help temper the effect on lung and heart function, but they have many side effects and more than a quarter of people with the disease cannot tolerate the drugs.

In Duchenne muscular dystrophy, the body has low or none of the protein called dystrophin, which helps maintain healthy muscles. Muscles are deprived of the chemical nitric oxide, which signals blood vessels to relax during exercise, increasing blood flow. The drug tadalafil, which works downstream of nitric oxide, acts to dilate the blood vessels.

For the study, 10 boys age 8 to 13 with Duchenne muscular dystrophy who were taking corticosteroids first were compared to 10 healthy boys of the same age. All of the boys with muscular dystrophy were able to walk, although some frequently used a wheelchair or scooter. The blood flow in all of the participants’ muscles was measured when they were at rest and when they were doing a handgrip exercise. The tests showed that the boys with Duchenne did have blood flow abnormalities, even though they were taking corticosteroids.

Next the boys with Duchenne received either tadalafil or the drug sildenafil and the tests were repeated. After waiting two weeks, the boys received the other drug and were tested again.

After taking either drug, the boys’ blood flow response during exercise was the same as that of the boys who did not have the disease.

Victor said the results are encouraging, but more research is needed before recommending the drugs for people with Duchenne muscular dystrophy. “This is not a cure, but it is the first stop toward identifying potential treatments,” he said.

The small study has several limitations. “We do not know whether this improved blood flow regulation can be sustained with long-term use of the drug,” Victor said. “This proof-of-concept study also does not address the crucial question of whether restoring normal blood flow regulation will preserve muscle and slow disease progression. If so, this would offer a new therapeutic strategy for Duchenne muscular dystrophy, and a Phase III clinical trial has been launched to find out.”

The study was supported by Parent Project Muscular Dystrophy and the National Institutes of Health/National Center for Advancing Translational Sciences.