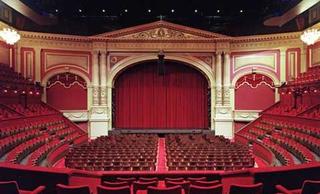 The Theater of Duchenne

At PPMD's Annual Connect Conference last month, Pat Furlong shared her essay, The Theater of Duchenne (PDF). In it, Pat dissects the clinical trial process by drawing comparisons to all of the teamwork that goes into producing a Broadway hit. A treatment for Duchenne will not be the result of one person's research, or one foundation's funding, or one pharmaceutical's investment. It will take a committed community of passionate, talented people to end Duchenne. Colorado FACES coordinator and parent Ivy Scherbarth responds to Pat's essay with her latest blog. We hope you will share your thoughts after you download and read the in-depth essay, The Theater of Duchenne (PDF).

Complex systems do not spring, fully formed from the brain of some super-thinking creator person working in isolation. Complex systems have moving parts. They have little loose bits near the surface that can be pried open. They have antecedents. They have history. Understanding the complex system of drug creation is no different.

I am a trained scientist, an anthropologist. For me, the inquiry process goes something like this: Oooh look! People over there are doing something! What are they doing? Who does it and when? What is the stated purpose of the activity in question-- why do the people who do this say they do it? What are the social functions of this activity-- by observation, what purposes do I see being served by the activity? And, finally, what other people, past and present, do this activity and what does the analysis of of their activity lend to the analysis of the activity in question?

Our culture, the sum of the things that we do around here, is just one of a long line of varied, interrelated cultures throughout history. Setting aside our personal histories of ethnic groups, immigration, marginalization, let's focus on a sort of "generic 21st century American" culture. Before the us that we are now, there was an us, or an almost-us, from an earlier time.

Medical research was certainly conducted by our earliest human ancestors, even before they domesticated plants and animals. They must have experimented, with trial and error, to learn which plants are foods, which are medicines, and which are poisonous. But they didn't do science the way that we do it now. The science that we do today has its antecedents in Medieval alchemy and the methodology of the Inquisition.

Maybe you haven't read Sir Francis Bacon, leading citizen of Renaissance England, who talked about using Inquisitory techniques to torture Nature deliberately, taking her apart piece by piece until the answers to your questions are teased out despite her innate recalcitrance. Nevetheless, you probably know enough about the Inquisition to understand the connections between its history and modern scientific methods. Ruthless efficiency! Nice uniforms! The unexpected arrival of breakthroughs! The scientific method is the direct descendant of the Renaissance.

But medical research, and the chemistry it involves in particular, has another parent as well. You can easily picture a movie set laboratory. The mad scientist working all alone through the night, surrounded by strange looking glassware, abstruse figures scrawled across blackboard and notebooks, secretly combining various bizarre substances in an attempt to change the composition of some basic matter. He is also a Renaissance figure: the Alchemist. Using occult knowledge distilled from mixing the proto-scientific thinking of the Greeks and Romans with the deeply religious sensibility of Medieval Europe, alchemists helped to create a new tradition that also led toward modern science.

The two highest goals of alchemy were, 1. to convert base metals, especially lead, into gold (changing the corruptible into the incorruptible), and 2. the creation of life from non-life. These are the procedures of immortality. Are these not the very goals that we still seek from biomedical engineering? Are we not hoping with our highest hopes that some mad genius somewhere will overcome stubborn and cruel nature (Duchenne) and transform death into lasting life for our sons?

The modern theater is another example of a holdover from Renaissance days. We still watch plays by Shakespeare and find them understandable and relevant. Shakespeare and his contemporary playwrights were doing exactly what every other intellectual of the Renaissance was doing: creating a mashup between Classical ideas and Medieval religiosity. Shakespeare drew from the socially aware and moralistic Greek plays and the religious, ecstatic Medieval passion plays to create Romeo and Juliet, Hamlet, even A Midsummer Night's Dream.

The goals of the theater haven't changed very much. We still go, hoping to be educated, to be entertained, to be uplifted and experience a certain kind of quasi-ecstatic state of emotional transportation. Like the scientists and the alchemists, performers in the theater are doing a kind of ritual. They have certain procedures and steps that they follow every time, each actor has his props and plays his prescribed role in the hopes of creating a synergistic experience that, ultimately, is more than the sum of its parts.

Perhaps the best route for us, as onlookers, either in the theater or the laboratory, is a new post-Renaissance mashup. If we can provide the modern-day analogues of the alchemists (the medical scientists) with gold (aka research grants), then they can continue to quest toward immortality in the form of drugs to combat Duchenne. If we can be an enthusiastic audience as parents to our sons, they can truly be the stars of their own, unique, self-directed plays. Like the alchemists, are we using magical thinking? Are we theatrically suspending our disbelief in the face of the long wait for therapies? Of course we are! I don't see anything wrong with that. it just makes me applaud that much louder for my son.

Ivy Scherbarth is a Colorado/Wyoming FACES Coordinator for PPMD. Follow Ivy at her blog, Living Duchenne.