Few pieces of legislation may be as peculiar – and as important to the development of drugs and devices in this country – as the package of bills known as Food and Drug Administration (FDA) Prescription Drug User Fees Acts, known as PDUFA, or user fees for short. Born out of a frustration – amplified by the lack of therapies to respond to the AIDS epidemic – that FDA was taking too long to review drug applications, Congress enacted the first such law 20 years ago, in 1992. The law set out the terms under which drug developers would help fund FDA to cover part of the cost associated with reviewing drug applications to help accelerate this work and clear the backlog. Like with many laws, the first PDUFA expired after five years, meaning it has had to be rewritten in 1997, 2002, 2007 and right now, in 2012.

So why should the Duchenne community care about user fees?

For one, in addition to pharmaceutical industry contributions to FDA, the user fee agreements negotiated between the FDA and industry contain a number of milestones of importance. In the current version for example, the agreement specifies a number of actions FDA will take over the coming years to advance the development of drugs for rare diseases like Duchenne. PPMD, our allies in the rare disease community and our champions in Congress will pay close attention to make sure all of these activities are carried out as thoroughly and expeditiously as possible.

Beyond the pure user fee issues, the package of legislation presents a rare opportunity to advance and enact other FDA reform proposals, such as measures that would provide FDA with additional tools to accelerate the review of potential therapies for serious and life-threatening conditions and to consult with external experts, including the patient community, on key issues.

Earlier this year, the PPMD board  approved a policy that touched on these and other issues, and our organization has been active on Capitol Hill urging that these important provisions be included in the user fee legislation.

Where are we in the process?

In terms of timing, both the Senate and House committees responsible for these issues approved their versions of the bill. The bills now move to the floors of each chamber for a full vote, and differences between the two will be worked out in a conference agreement.

Below is a quick summary of the three key legislative provisions PPMD and our advocates have been supporting. We are thrilled to report that the House and Senate version contain these provisions. Your Advocacy has paid off! 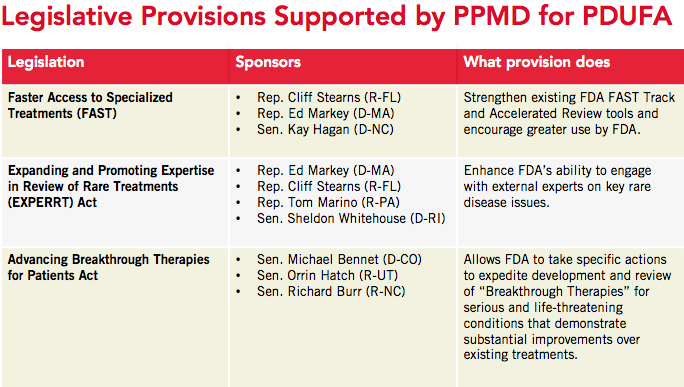 These are definite victories for the Duchenne community. We are extremely encouraged to see these legislative advances moving forward in both the House and Senate.

Over the past weeks in particularly, PPMD has engaged with a number of offices and the key committees to offer our support behind these core measures as well as recommendations for potential improvements.

We will continue to engage aggressively throughout the process and will alert advocates on any specific opportunities or needs as the package continues its way through Congress toward a final vote and passage.