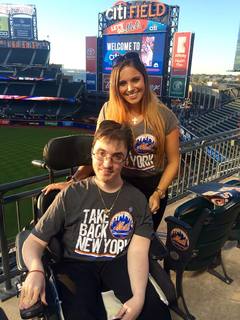 Michelle Ioannou took part in Giving Tuesday in honor of her brother Christopher, 21, who has Duchenne! To date she has raised $2,600 through her own social media and email outreach. PPMD is honored to be the recipient of donations raised through Michelle’s fundraising efforts. This and all money raised online through our holiday campaign this year will go towards funding early stage research. Click here to donate to this year’s holiday campaign.

What inspired you to fundraise on Giving Tuesday?

As someone who currently works in the nonprofit world, I know the importance of Giving Tuesday, have attended workshops on it, and run the campaign for my company, The Parent-Child Home Program. However, I wanted to do even more. I wanted to bring my passion for Duchenne advocacy to another level - maybe it was the FDA #DuchenneApprovals trials that happened about a week ago, or maybe it was seeing my brother's disease progress; I wanted to bring more attention to the disease.

My little brother Christopher just turned 21 years old in October. He was diagnosed when he was five and has been confined to a wheelchair since he was ten. I've seen firsthand how the disease has progressed, not only attacking his leg and arm muscles, but affecting his lungs and heart as well. Christopher is currently doing great - he just graduated college with his Associate's Degree making Dean's List every semester, is the most optimistic, funniest person I know, and his passion for sports is like no other (he'll never miss a Mets or Jets game - he's the biggest fan I know!). He's such a loving person that it's heartbreaking to see him weaken and that's what made me create a fundraising page for Giving Tuesday.

Our family is beyond supportive and they just took this love to another level on Giving Tuesday, helping me raise over $2,000 for PPMD. As of this morning, donations were still coming in! Additionally, working in social media, I made sure to utilize Twitter in my fundraising as well - which brought in donations from people who have never even met Christopher! The support was overwhelming and filled my heart with joy. Not only did I want to raise funds for Duchenne advocacy, research, and support, but I wanted to raise awareness. There's so many people in the world that have never heard of Duchenne or don't know how horrid of a disease it is, and I'm determined to change this.

Donate to This Year's Holiday Campaign