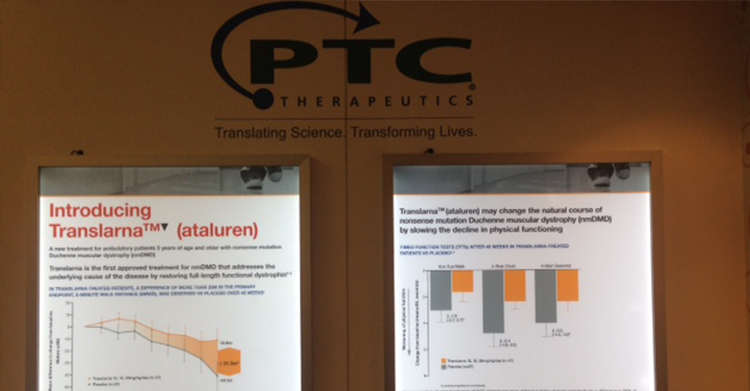 PTC Therapeutics gave an overview of the data supporting the recent accelerated approval for Translarna® in Europe and answered questions from prescribing physicians about how the medication should be used.

Dr. Eugenio Mercuri first described how the results of the six minute timed walk, the main outcome for the current phase III study of Translarna® and for previous studies, is affected by the participants’ walking ability at baseline and by the age of the participant. With this idea in mind, the company reviewed data from the phase 2b study for participants who were in the “decline phase” of their walking ability and found that this group actually walked 50 meters further than the placebo group. When they studied only the boys who were walking less than 350 meters at the start of the study, they found that this group could walk 68 meters more than the placebo group. The combined data from all participants, including those who were better walkers at the start of the trial, showed a 30 meter improvement compared to placebo.  It was on the basis of this analysis of the phase 2b data that the European Medicines Agency granted an accelerated approval for Translarna® in Europe.

Dr. Rosaline Quinlivan addressed the question “What are realistic expectations for a disease modifying treatment?” She pointed to the data from boys who participated in the phase 2a and 2b studies, some of whom have been on drug since 2006, and 50% of whom are still ambulatory.  The long term safety results in the boys on extended access is also comparable to what was seen in the phase 2b study.

Dr. Quinlivan confirmed that the approval of Translarna® in Europe is for boys with a diagnosis of Duchenne who are older than five and still walking.

New challenges highlighted by presenters include how to start treatment as early as possible and the need for biomarkers and surrogate markers that are more efficient than six minute timed walk in showing that the drug is working.

The audience asked some interesting questions about Translarna. There were several questions about “off-label” use—that is, use in children younger than 5, and use once a person loses the ability to walk, and use in manifesting carrier females. The answer was that PTC is planning to evaluate the medicine in other groups so clinicians and families can have as much access to the medicine with as much information as possible. A related question came in about cost of the drug. The company did not have a firm answer but said they expect that the cost will be in line with drugs for other rare disorders.

Measuring The Impact of Duchenne

It is vitally important for clinical research that we are able to measure the effect of Duchenne on people living with the disorder. Quite a few talks and posters described research about how to measure the impact in ways that are responsive to change over time and are acceptable to families.

From Thursday’s poster session, there were several posters about measuring Duchenne, and we’ll highlight two.

Measuring the Effect of Therapies in Very Young Children

As effective drugs become available for Duchenne we will want to understand how early these drugs could be used—possibly even in infants after a positive newborn screen.  To prepare for this eventuality, Dr. Richard Finkel of Nemours Children’s Hospital has begun building the case for using the time that children first start walking as a clinical endpoint in infants.  He presented a poster that analyzed data from both the US MD STARnet database and a Dutch database together suggest that boys with Duchenne tend to start walking at around 17 months, about 4.9 months later than average.  Dr. Finkel predicted, based on these findings, that that you would need between 30-50 infants per treatment arm (depending on the variability) in a clinical trial to detect a drug effect that leads to earlier walking in these boys.

Another poster was focused on patient and/or parent reported measures. The UCDavis group showed data on the PODCI, which is a measure of function as reported by (in this case) parents, compared to function measures done in the clinic. They found that the PODCI upper extremity, transfers and basic mobility items showed clinically-meaningful change. PPMD has been in discussions with UCDavis about these data for several months and we will include specific PODCI questions in the DuchenneConnect registry, based on their data.

On Thursday we heard a series of talks about the use of MRI: from the NIH imaging study, a study done at Leiden University in the Netherlands on imaging patients on drisaperson, a study measuring diaphragm motion in patients with Duchenne who can no longer walk, and a talk about measuring the arm muscles with MRI over time. The important take-home message is that MRI methods are looking quite good and researchers are starting to understand the most effective ways to use MRI data in the clinical research context.

Challenges and Opportunities in Measuring Impact

Today (Friday), we heard an interesting summarization by Thomas Voit on the challenge of making therapies for neuromuscular disorders. He talked about the importance of all we’ve learned about natural history and the difficulty that sponsors face when forced to learn important new information about natural history during the course of their trials. He then spoke about endpoints, and presented an optimistic overview of MRI as a very promising endpoint. His core messages were a call for trial sponsors to be courageous in their selection of endpoints (to include newer endpoints like MRI), and a reminder of the importance of continuing to plan and finance natural history studies.