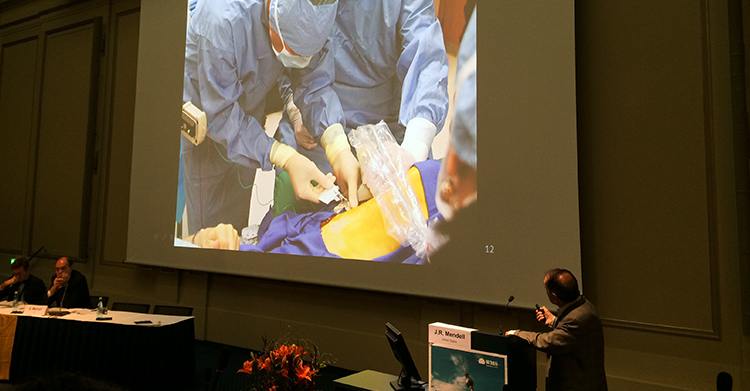 Dr. Jerry Mendell of Nationwide Children’s Research Institute presented data from a ground-breaking PPMD-funded study demonstrating that a modified virus carrying the gene for follistatin can improve performance on the 6 minute walk test in study participants with Becker muscular dystrophy. This is the first time a gene therapy has demonstrated an improvement in function in a muscular dystrophy. Previously, animal studies demonstrated that a molecule called follistatin could be used to block myostatin in the muscles, leading to increased muscle size and strength, even in mice that lacked dystrophin. For the clinical study, Dr. Mendell and colleagues injected the modified virus into 12 places in the quadriceps muscle in 6 men with Becker muscular dystrophy, where it entered the muscle cells and allowed those cells to make and secrete follistatin. The investigators chose to start with Becker muscular dystrophy because those with BMD have significantly weak quadriceps muscles compared to the surrounding leg muscles and improving quad strength should lead to improved walking abilitly. The participants were all over 18 years of age and had to be able to complete the 6 minute timed walk. The first three participants received a low dose of gene therapy and the second three participants received a higher dose.

A lot of questions have been raised about why the phase III study for drisapersen, a drug designed to skip exon 51, was negative after the phase I and phase II studies showed functional improvements. Dr. Francesco Muntoni of University College London summarized the existing data for Drisapersen, emphasizing that an analysis of the composition of all three main Drisapersen studies demonstrated that the boys in the phase III study had much slower walk times at the start of the study than the boys in the first two studies—in other words, they were on average further progressed in their disease. Dr. Muntoni suggested that a longer time period may be required to see a response to exon-skipping in more severely affected boys, and pointed to extension data from all three studies showing improvements in 6MTW at 96 weeks compared to the same at the official study end time at 46 weeks. Magnetic resonsance imaging data from 5 boys who were on drug the whole period also showed an improvement in the muscles compared to those of 3 boys who had not received drisapersen. Adverse events across all trials included “sub-clinical” protineuria (protein in the urine that is seen in laboratory tests but isn’t causing any symptoms), local injection site reactions and thrombocytopenia (low platelet levels in the blood). In total, over 300 boys have received the drug to date.

Dr. Jerry Mendell of Nationwide Children’s Research Institute in Columbus also summarized the data for Sarepta’s exon-51 skipping drug eteplirsen. He emphasized that over 1800 doses of eteplirsen have been administered over the course of two human clinical trials with no adverse events. Sarepta’s phase IIb study was designed so that 8 boys of the original 12 would receive either 30mg/kg of eteplirsen or 50 mg/kg of eteplirsen while four boys would receive placebo for the first six months and then two would be moved to the low dose and two moved to the high dose of the drug. In practice, two boys who were in the group that received eteplirsen from the beginning stopped walking before 24 weeks. The trial was changed to a “modified intent to treat” study that allowed the investigators to continue without the data from the two boys who could no longer perform the 6 minute timed walk. For the boys who continued to perform this measurement, the four who had received eteplirsen from the start of the trial declined by only 32M at 144 weeks and the boys who started on placebo and then crossed over to receive drug (the “placebo-delayed” group) declined by only 39M total. The natural history of the disease would predict that without treatment, over the same period, the boys should have declined by about 140M. Measurements of respiratory function remained stable in all 12 boys over the same period.

Many different versions of the dystrophin protein are expressed in tissues throughout the body, in addition to muscle, but little is known about the function of these different dystrophin versions in other tissues. Dr. Nathalie Doorenweerd of Leiden University Medical Center in the Netherlands demonstrated that a version of dystrophin called the “dp140 isoform,” which lacks the beginning of the full length dystrophin protein found in muscle, is strongly correlated with decreased brain volume and decreased blood flow to the brain. Boys with Duchenne caused by mutations between exons 1 and 40 should still be able to make the dp140 isform of dystrophin while boys with mutations between the intron 44, or exon 55 and further should lack the dp140 isoform. The investigators could detect differences in brain size and functional imaging between the two groups.

Lindsay Alfano of Nationwide Children’s Research Institute wondered how much motivation might effect performance of the 6 minute timed walk, the primary outcome measurement in most trials for Duchenne muscular dystrophy. She emphasized that it’s important to better understand sources of variabililty in this common endpoint. The investigators started with a group of 27 ambulatory boys with Duchenne with a mean age of 9, and asked them to the 6 minute timed walk two times with a 30 minute break in between. For the second timed walk, one group of boys were told to walk as fast as they can and then they would receive a prize. In contrast, the second group was told that they would receive $50 if they could beat their first time (both groups actually received $50 at the end). Neither the boys nor the evaluators were told which group was which.

The study showed that the boys who were promised the $50 incentive walked an average of 41 meters further during the second timed walk, a 10% difference in scores. The boys without the incentive walked 2% faster on the second test. The difference between the two groups was statistically significant. The investigators then wondered if the boys who were more severely affected were less able to improve their times, but found instead that they were able to improve on the second test almost the same amount as the boys who were less affected. They concluded that incentives can have very significant affects on the 6 minute timed walk and that investigators should be aware of the need to sufficiently and equally incentivize all trial participants. The investigators will next try to determine if a shorter timed walking test would be less influenced by incentives. 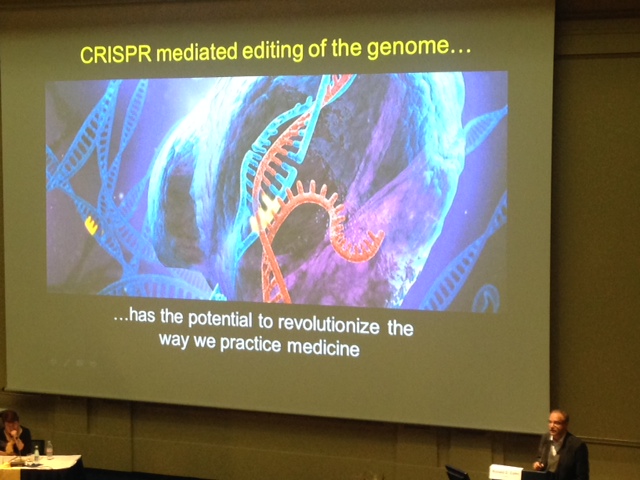 Although a number of high tech therapies in development for Duchenne are designed to provide an extra copy of the healthy dystrophin gene (gene therapy) or tweak the way the cells use the mutated gene to make a protein (exon-skipping), none of these change the DNA code itself. For many years scientists have been quietly experimenting with ways to do just that and now, with a new technique called CRISPR (pronounced “crisper”) Ronnie Cohn of Sick Kid’s in Toronto can change a sequence of DNA in the cell’s nucleus that controls the production of utrophin, dystrophin’s molecular cousin, so that much more of it is produced. The goal of this work is to produce enough utrophin to compensate for the loss of dystrophin. The technique can also be used to directly correct very small mutations in the dystrophin gene itself, but each individual mutation would require its own specific approach so Cohn’s lab is focusing on upregulating utrophin for now. Cohn’s laboratory is just starting testing the utrophin upregulation in mice that lack dystrophin. 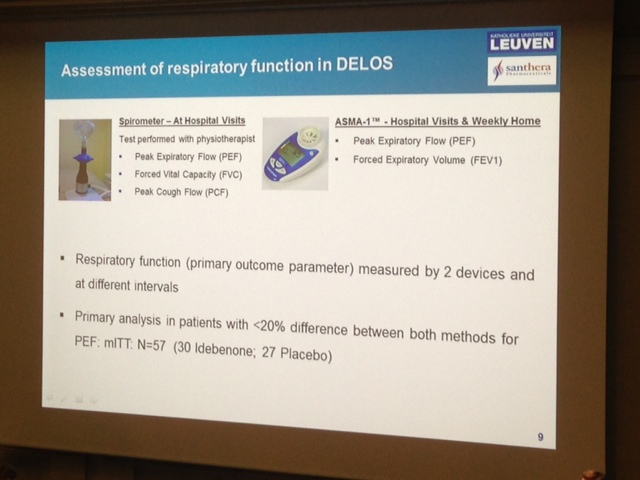 Dr. Thomas Meier from Santhera gave an update on the phase 3 DELOS idebenone trial. The trial aimed to assess the efficacy of idebenone, compared to placebo, on delaying or improving the loss of lung function. The trial has been conducted in the United States and Europe with 31 patients on idebenone and 33 on placebo. Patients were 10-18 years old, not on steroids, and most of them are non-ambulatory. After treatment for 12 months, the data show that there were significant reductions in the loss of peak expiatory flow (the primary study endpoint) and of forced vital capacity. Other clinically important findings were that fewer patients on idebenone progressed to the point where their coughing was no longer effective and that they had fewer respiratory tract infections. There were few side effects and most patients tolerated idebenone well.