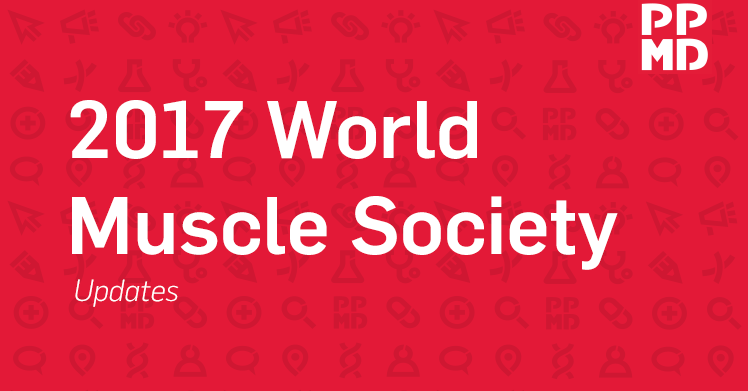 Annie Kennedy and Kathi Kinnett from the PPMD team are attending the 22nd International Annual Congress of the World Muscle Society and will be reporting back over the next couple of days. More updates to follow!

Wednesday was the first day of the WMS meeting, and featured a vast array of posters. Highlighted below are a few that the PPMD team thought were the most novel, interesting, and relevant, especially in the area of Duchenne care.

MRI
Upper Limb & Lower Limb
MRI is a huge topic this year, and includes posters around cardiac, upper limb and lower limb MRI, in both Becker and Duchenne. The Imaging DMD group evaluated upper limbs. Looking at 85 boys and 24 controls who were all around 12 years old, the group found that there was an increase in fat in the deltoid and biceps muscles, as compared with the triceps and forearms. The fat fraction of the arms increased with loss of ambulation and a higher “performance of upper limb” score. In addition, group (“Magnetic Resonance Biomarkers in the Proximal and Distal Upper Extremity in a Large Cohort of boys with Duchenne Muscular Dystrophy”) found that the fat fraction in the lower limbs of Becker patients correlated with clinical testing in Becker patients.

The Nationwide Children’s group evaluated the cMRI’s of Duchenne and Becker patients and found that there was significant late gadolinium enhancement (showing fibrosis in the cardiac muscle) by the time Duchenne patients reached late adolescents (“Adolescents with Duchenne and Becker Muscular Dystrophy: a Cardiac Magnetic Resonance Comparative Study”). One third of Becker patients had cardiac fibrosis by their late 30’s, with several showing fibrosis by late adolescence as well.  More than half of the both the Becker and Duchenne patients showed fibrosis while maintaining normal function.  The (“Qualitative Cardiac NMR Imaging in a Large Cohort of Patients with Becker Muscular Dystrophy”) group studied 88 Becker patients, ages 38.7 +/- 13.6 years, showed a low ejection fraction and correlation between low ejection fractions and the presence of fibrosis.   Conclusion: cardiac care for people living with Becker should be the same as those living with Duchenne.

A few posters focused on adult care and quality of life.  Dr. Ros Quinlivan’s group in the UK evaluated the incidence of premature mortality (“Analysis of Mortality in a Cohort of Adult Duchenne Musculary Dystrophy”).  Her study included a cohort of patients over 5 years with 79% who had not used steroids, or used them briefly.  The factors that led to premature mortality in her population included continuation of regular (at least annual care) and maintenance of pulmonary surveillance/management.  Those patients with learning disabilities seemed to fare worse, possibly due to non-compliance with ventilator assistance. Natalie Goeman’s group from Belgium (“Has Outcome Changed for Adults with Duchenne Muscular Dystrophy?”) also recognized dialog between the pediatric and adult providers was important to continuation of care.

Brenda Wong and the Cincinnati group presented a series of 3 papers.

There were also a few posters focused on psychological health and cognition in Duchenne. One study (“Predominant Posterior Cerebral Cortical Atrophy in Patients with DMD Mutations”) looked at the cortex of the brain and found that there is an altered cortex in patients with Duchenne.  It’s unclear if this altered cortex might correlate with behavior and cognitive function.

From research on new biomarkers to CRISPR CAS-9 to approaches to gene therapy to clinical trial read outs from many of the companies in the Duchenne space to novel approaches to providing care and psychological support to families within the community. The posters spanned the landscape and reflected both the challenges and opportunities before us. Today’s industry seminar was sponsored by Santhera Pharmaceuticals and centered on Respiratory Function Decline in Duchenne. Once again… The buzz here at WMS is Duchenne.

Some highlights from posters presented today: 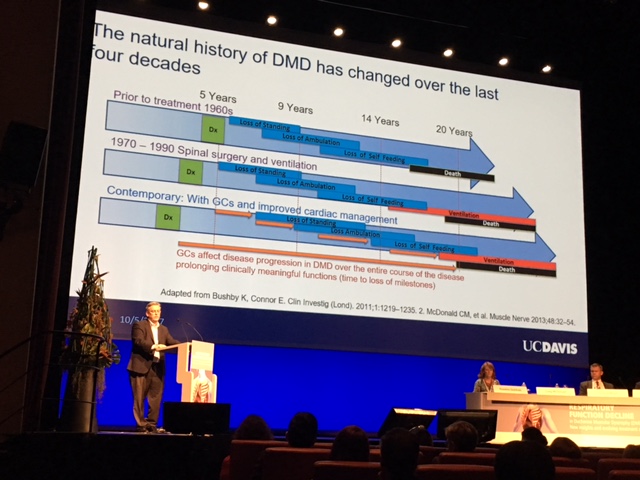 The stated symposium objective was to provide an educational symposium on respiratory decline & clinically relevant thresholds in Duchenne in an effort to impact global Duchenne respiratory clinical care practices.

Dr. Hank Mayer reviewed linking pulmonary function to skeletal muscle function in that the earlier you lose ambulation, the more comprised vital capacity is expected to be. He further discussed the various measures of pulmonary function including: Peak expiratory flow (PEF), forced vital capacity (FVC), and forced expiratory volume (FEV). Dr. Mayer reviewed critical clinical thresholds and recommended interventions for each point of clinical progression. He then concluded his presentation by showing encouraging emerging data from recently approved therapies in Duchenne (Deflazacort) demonstrating an attenuation in the loss of pulmonary function.

Dr. Gunnar Buyse then reviewed the safety and efficacy findings on Ph III DELOS trial. Ph III randomized trial to investigate idebenone for use in Duchenne with 64 steroid naïve patients age 10-18 in respiratory decline phase of disease with PEF % <80%. Primary endpoint, change on PEF over 52 weeks. Within the study, 92.2% were non-ambulatory, 56.3% had used steroids previously, mean age of participants was 14.3 years, 60% had a Brooke Score >5.

Dr. Buyse continued by reviewing the SIDEROS trial to assess the efficacy of idebenone compared to placebo in slowing the loss of respiratory function in patients who are receiving glucocorticoicds.

For more on the Sideros study, visit www.siderosdmd.com or watch PPMD’s March 2017 webinar with Santhera. 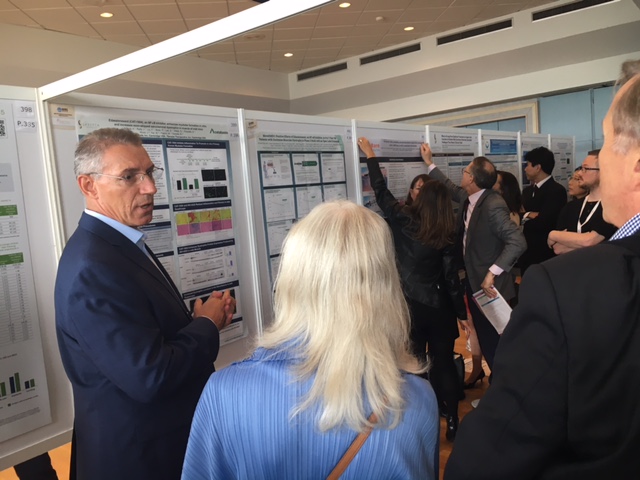 Catabasis had two poster presentations, including one poster that was included in the Breakthrough Presentations. 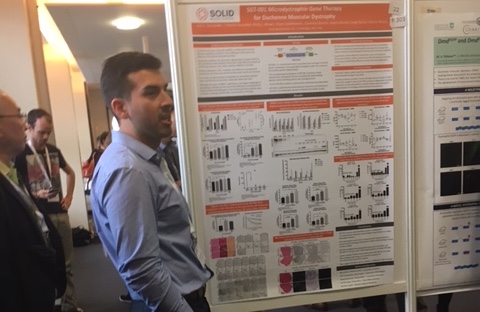 Cardiac and Pulmonary Surveillance and Management 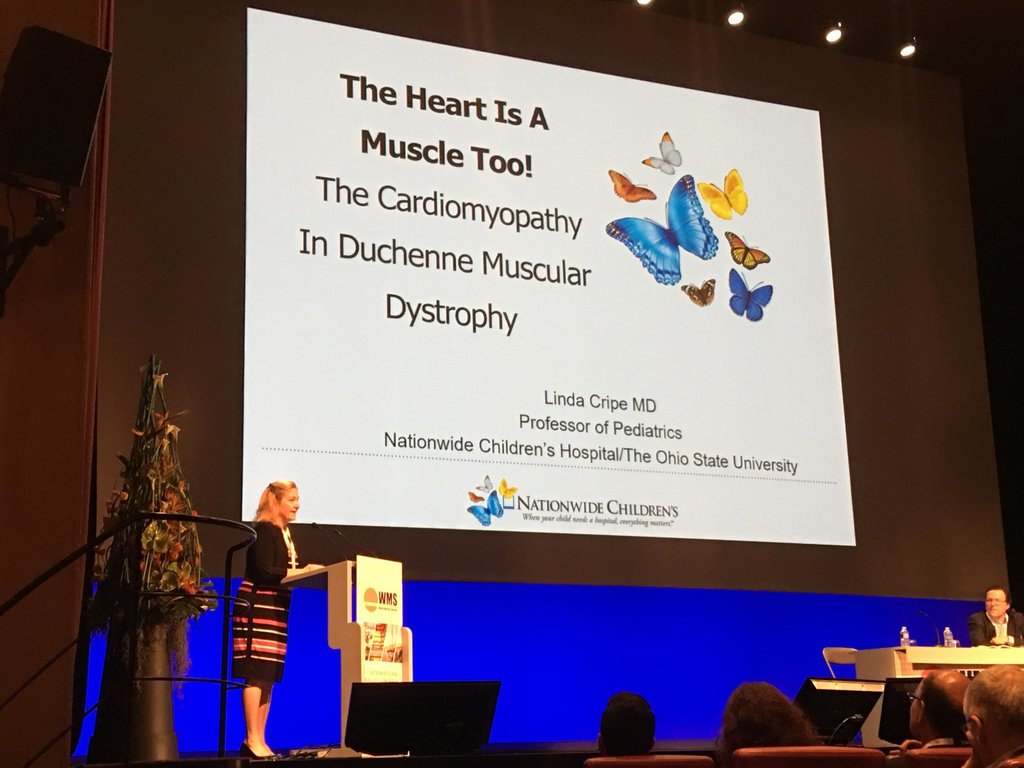 This year there were platform sessions on cardiac and pulmonary surveillance and management, as well as consideration of potential alternative measures that might be used in clinical trials.

While most trials include forced vital capacity to measure pulmonary strength and volume, Brigitte Fauroux, pulmonologist from Paris suggested that perhaps including other measure that patients of all ages might be able to perform might be appropriate. Some of the measures that she suggested include the SNIP (sniff nasal inspiration pressure) and cough (which indirectly measure diaphragm strength and function). These are both very easy to manage for patients of all ages and correlate will with FVC.

Linda Cripe, cardiologist from Nationwide Children’s Hospital, discusses 4.areas of cardiac care.  The first was the efficacy of cardiac MRI as compared to echocardiogram. Ina recent study, of 314 patients of all ages, 17% of patients less than 10yo showed myocardial fibrosis; 59% of patients over age 15yo had fibrosis.  30% of patients had normal function with fibrosis, while 89% showed abnormal function.  The second included a discussion of assist devices (ICD’s, and LVAD’s (left ventricular assist devices). While there have been patients who have used these devices, their use is still very new and it is somewhat unclear if these devices can enhance quality and quantity of life.  Third was a discussion of their recent study of chest pain correlated with abnormal findings on MRI and increased cardiac enzymes, indicating cardiac muscle damage. Some of the results of this study showed that, of 8 Duchenne patients admitted to Nationwide with complaints of chest pain, all patients presented with abnormal EKG’s, increased enzymes, EKG and MRI changes.  7of the 8 patients had normalization of all if those studies over the next week without normalization of MRI findings. This study was performed subsequent to the PPMD Acute Cardiac Episodes in Duchenne meeting, spring 2016, and has been submitted for publication. The last area included the interim results of the ongoing carrier study, sponsored by PPMD.  Of the 34 carriers (average age 44yo) who have been screened with cardiac MRI, 17 have shown fibrosis, 5 have shown decreased heart function and 3 have shown some dilation of the cardiac chambers. More data to follow!

One of the interesting posters was reviewed by Dr. Tim Cripe from Nationwide Children’s Hospital. This poster addressed the effects of DMD on the brain. Although we know some people with DMD and BMD have cognitive and behavioral issues, little is known about why. A group from the University of Campinas in Brazil compared brain MRI findings in 8 DMD and 2 BMD patients (average age 13.2 years, half were non-ambulatory) to age-matched children without DMD or BMD. They found that DMD and BMD patients had decreased thickness of the surface of the brain in two areas that could explain neurocognitive issues. While the authors couldn’t determine whether the reduced thickness resulted from a defect in development or a degenerative process, they concluded it would be worth looking at more patients longitudinally with a larger study.

Part 2 of our WMS update will be coming soon, covering additional updates from Day 2 and the remainder of the meeting!