As we finalize the agenda for this year’s Connect Conference, I am once again amazed at how much of a challenge it is to squeeze in all of the talks on different therapeutic approaches to treating Duchenne—in fact, there are too many to cover comprehensively this year. Sometimes it’s good to remember that mutation-specific approaches like exon skipping, although promising and exciting, are not our only irons in the fire. And many of these other therapeutic approaches will be entering the clinic by the end of this year or the next, providing a variety of options for participating in trials.

The chart below gives a good overview of the many targets for therapeutic intervention in Duchenne—with the idea that we will ultimately treat Duchenne with a “cocktail” approach, PPMD is funding research in almost all of these areas. 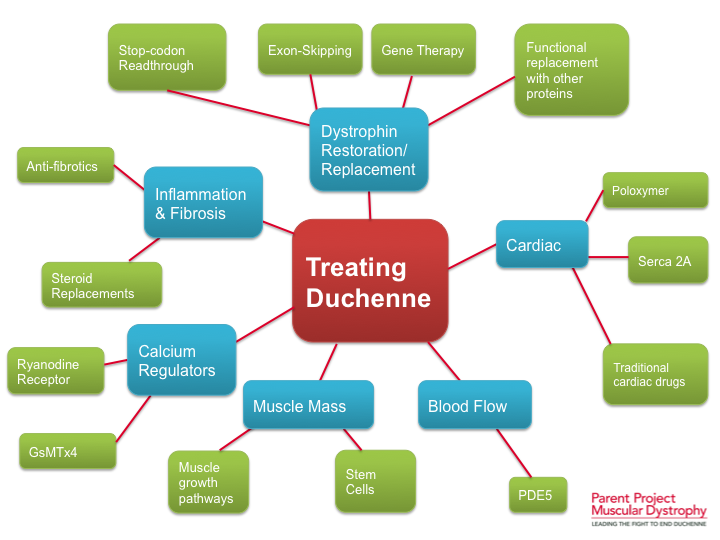 For example, you will hear at the Conference this summer from PPMD grantee Jerry Mendell at Nationwide Children’s Research Institute, who has been injecting the gene for the muscle growth protein “follistatin” via gene therapy into the quadriceps (thigh) muscles of participants with Becker muscular dystrophy. Although the number of participants in this gene therapy trial is very small, most of those participants have shown improvement in their six-minute timed walk tests after the gene transfer. This approach is interesting because the muscle cells that take up the viral vector carrying the follistatin gene effectively become little factories that make follistatin continuously, spewing it out into the compartment outside the cells where it can affect other muscle cells, even those that didn’t take up the original gene. Muscle cells that are exposed to follistatin become larger over time, and in animal studies become stronger as well. Dr. Mendell is thinking about the prospects for a Duchenne trial next. Those with Duchenne normally make some follistatin so the protein shouldn’t be seen as “foreign” by the immune system.

Pfizer is also developing a compound that may increase muscle mass in Duchenne.

At the same time, the team at Tivorsan, with a $500,000 grant from PPMD, are preparing for a clinical trial with “biglycan”—a small protein that stimulates the production of “utrophin,” a molecular cousin of dystrophin. During fetal development, utrophin serves the same purpose at the muscle membrane as dystrophin. But after birth, utrophin becomes relegated to tiny areas on the muscle surface under the nerve endings, while dystrophin becomes distributed across the muscle cell membrane instead. Years ago, investigators discovered that artificially increasing the amount of utrophin at the cell membrane after the fetal stage could compensate for the loss of dystrophin—at least in mice. And the Tivorsan team, led by Dr. Justin Fallon at Brown University, with funding from PPMD, Charley’s Fund, MDA, and the National Institutes of Health, discovered that biglycan can trigger an increase in utrophin in muscle cell membranes. Now the Tivorsan team has figured out how to manufacture larger quantities of biglycan in a way that will meet regulatory requirements and has completed the first three of four PPMD milestones for the project. We can look for a clinical trial in the US toward the end of this year or the start of 2015—details to come at the conference this summer.

Other companies looking at utrophin upregulation include UK company Summit PLC, which received funding from PPMD to reformulate their utrophin up regulating compound SMCT-1100.

And what about a drug that works like steroids but without the weight gain, loss of bone density and behavioral changes?  In the category of “steroid sparing” drugs, Catabasis is moving ahead with its compound CAT-1004, which is a novel molecule with a linker creating a new molecule from DHA (omega 3 fatty acid) and salicylate, which is similar to but not the same as aspirin. In this form, DHA and salicylate have powerful anti-inflammatory effects and are thought to work through some of the same pathways that produce the good effects of prednisone and deflazacort without activating the more problematic steroid pathways. So why not just wash down an aspirin with some fish oil? That’s not a good idea because it won’t work the same way - by linking the two compounds together through a special proprietary technology, Catabasis has designed a way for the compounds to enter into cells together and then be cleaved into their components, right at the point where they are needed, increasing their effectiveness and reducing the potential for side effects. To help this project along, PPMD recently provided funding to the University of Florida to make serum from Dr. Krista Vandenborne’s MRI study available to Catabasis for biomarker identification. Catabasis has recently completed several studies of the compound in healthy adults and will discuss next steps at the Connect Conference

Reveragen Inc. is another company that is developing a steroid-sparing drug.

In addition to these “new chemical entities”—drugs that have not been approved for use in humans before, PPMD is supporting the development of a number of approved drugs that may have significantly shorter paths to the clinic than new drugs. In most cases the safety of these drugs and their efficacy in other indications is well understood, so studies in Duchenne are focused largely on demonstrating efficacy in Duchenne. One example of such a drug is tadalafil, an inhibitor of phosphodiesterase 5 and the same ingredient in the well-known drug for erectile dysfunction, Cialis™.  PPMD first funded Dr. Stanley Froehner and investigators in his laboratory at the University of Washington to demonstrate that PDE-5 inhibitors are helpful in mice that lack Duchenne, possibly due to their ability to increase blood flow to the muscle, although there may be other mechanisms at work as well. When these results looked promising, PPMD made a grant to Dr. Ronald Victor at Cedars Sinai to test the premise that blood flow to the muscle is irregular in Duchenne muscular dystrophy and that administering tadalafil restores blood flow to normal.

Dr. Victor’s work caught the attention of Eli Lilly, the makers of tadalafil, and the company agreed that the data were compelling enough to launch a phase III study of the drug in multiple sites in the US and other countries. This study is now recruiting actively and we will hear an update from Lilly at the Connect Conference.

Another promising, and already approved category of drugs is that of “aldosterone inhibitors,” which are typically used to control blood pressure. PPMD funded Dr. Jill Rafael-Fortney at Ohio State University to follow up on her initial findings that a combination of the cardiac drug losartan and the aldosterone inhibitor spironolactone could almost completely block loss of muscle function in mice that lacked both dystrophin and some utrophin if the treatment was started very early. There were significant benefits to heart function as well. With PPMD funding, Dr. Rafael-Fortney worked to tease out the different contributions of losartan from those of spironolactone.

In the meantime, based on these promising findings, PPMD funded a group of investigators, now headed by Dr. Subha Ramen at Nationwide Children’s Research Institute, to investigate the effects of another aldosterone inhibitor called “eplerenone” in a clinical trial for Duchenne. Unlike spironolactone, eplerenone doesn’t block the effects of androgen and has no “feminizing” side effects. The initial study enrolled 40 participants and was placebo-controlled—the primary outcome was cardiac benefit. The analysis of the first phase of the study is ongoing, but PPMD has made a second grant to investigators to continue to follow the study participants for an additional two years, with all participants on epletenone. An update on this work will be presented at the Connect Conference.

Another approved drug that has shown promise in mouse studies is Tamoxifen—more commonly used to treat breast cancer. PPMD funded Dr. Urs Ruegg of the University of Geneva to conduct additional preclinical studies in preparation for launching a human trial. That final data is being analyzed now.

Stay tuned in the near future for more research announcements from PPMD.  We have just received applications for drug development projects in response to our “Xcelerate” Request for Applications and those will be reviewed by the Scientific Advisory Committee during the Connect Conference. We have learned over time that successful therapy development requires a commitment, not just to funding individual drug projects, but also to improving the entire ecosystem surrounding trials—from decreasing the variability of clinical care, to drafting regulatory guidelines with the FDA, to developing tools that decrease the time and cost of conducting trials.

Comment by RAJIV BEHL on July 2, 2014 at 1:58pm
Dear Sir/Madam..my son is 6 years old having DMD Exon deletion 48-52 from india..request you to pls guide us for best trearment available for him.as now he walks/plays well and go to school but he feels problem to climb stairs...pls guide

It's definitely an interesting idea--in this type of muscle injury you have an acute, rather than chronic injury and it's isolated to one place in the body, but there might be lessons learned that we could use to apply to chronic muscle wasting.

Sharon, have you seen this? I heard this on radio this morning..