My BRAVE Story: Right now HOPE is what we focus on; it is all we have

We began this journey with DMD in July 2013 when our 7-year-old son, Caeden, went to Children's hospital for a neurological evaluation and blood tests were conducted. We received a call several days later that his CPK levels were extremely elevated which indicates a muscle disorder. Caeden had genetic testing done to determine the form of muscular dystrophy and told we would get the results in about a month. We received the call about a month later which diagnosed Caeden with Duchenne Muscular Dystrophy(DMD). We were beyond devastated and a lot of tears were shed and so much uncertainty. Several weeks later we were told that Devin would need to be tested as well since it is a genetic disorder and it mainly effects boys. Devin had his testing and another blow Devin was diagnosed with Duchenne Muscular Dystrophy as well. Both Caeden and Devin have Exon 18 deletion. We were not even able to process the diagnosis for Caeden and now we had to digest the same diagnosis for Devin. So many emotions especially since our only two children have been diagnosed with such a devastating diagnosis. 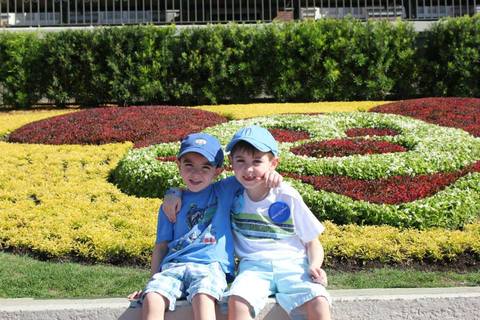 So where we stand right now is we live day to day and we love them. The boys have good days and bad days and we know due to the diagnosis there are a lot more bad days in the future. We had moved to a new home in July before all this happened and now we have a home with stairs to get in the house and for the boys to get to their bedrooms and that is not going to be functional for long. We recently purchased a used minivan as it is a little easier for the boys to get in and out of however at some point in the future we will need a fully accessible van and they are very costly. We know there are many other things we will have to consider or think about in the future. The worst is how devastating it is to think that your happy, loving boys will continue to decline. They will not be able to jump, climb, then walk. They will not be able to do a lot of things on their own; getting dressed, bathing, feeding, and the worst of all be able to hug us. They will lose their ability to breathe, and their heart will stop beating and ours will too. There will be nothing left for us as they are our everything.

Right now HOPE is what we focus on; it is all we have. Hope that the FDA responds to the petition to approve Eteplirsen by Sarepta Therapeutic the one of the amazing treatments that can save our boys and all the boys with DMD. By not approving this you remove all hope. Please be receptive and supportive of treatments for our boys. "There are two children that stole our hearts and we will not let Duchenne Muscular Dystrophy steal them"