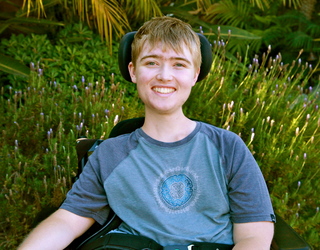 Now is the time... My son Dusty is 21. Duchenne muscular dystrophy has stolen much from him, his ability to walk, to hug his family, to move, to lift his arms, and to do the simplest of tasks, like brushing his hair. At 21, he is now faced with a steadily weakening heart and diaphragm that will one day steal his life away. What Duchenne didn't steal is his deep passion and love for life and his ever-present smile. Dusty has worked hard to raise awareness for Duchenne and starred in a feature documentary about his life called "Dusty's Trail". Like many other boys and young men with Duchenne, Dusty has participated in FDA drug trials aimed to find treatments for his disease.

When Dusty was younger, and while other boys his age were enjoying baseball practice and running and kicking a ball, for 12 months he traveled thousands of miles every few weeks, endured four minor surgeries, countless blood draws and other inconveniences as part of a phase II trial. Boys like Dusty take part in trials for their peers and for the next generation in hopes that outcomes will change. So far nothing has changed. The only thing that has changed is that he has become weaker and weaker. It is heart breaking for his family. Just the other day, Dusty saw a poem on a doctor's wall that described all of the ailments a person had but repeats the refrain: "There's nothing whatever the matter with me, I'm just as healthy as I can be, I'm so well for the shape that I'm in." Dusty is like that. Ask him how he is doing and he is always doing great. Even when he had blood draws every hour as part of a drug trial, he was great.

Dusty and all the boys and young men with Duchenne deserve better than for bureaucratic red tape to get between them and a treatment. They don't have time for such nonsense. Now is the time to accelerate the approval of drugs that can save our sons.