My BRAVE Story: It can happen to anyone

It can happen to anyone. Duchenne knows no borders of geography or ethnicity. My beautiful boy had trouble walking, getting off the floor. He never crawled. Doctors assured me "He'll grow out of it." My son's physical abilities peaked at 7, but he frequently fell even at a young age. His body could never keep up with his dreams and desires. It was with bittersweet relief when he broke his ankle at 10 and stopped walking. That's right. I WANTED my boy to use a wheelchair. NO MORE FALLING. Whenever I wish for life without a wheelchair, I simply look back to when my child would spontaneously crumple to the ground, unable to catch himself and slam his face onto the pavement, carpet, or his own feet. The horror of not being fast enough to catch your child, and then living your sons agony with him as he cries out in frustration that his body WON'T DO WHAT HE NEEDS IT TO. 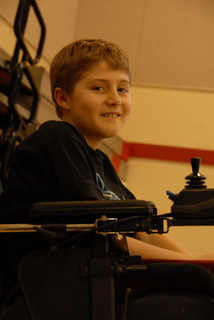 While I live in this "honeymoon phase" of my son's relatively good health, I'm constantly aware that his heart may give, he may not recover from a simple flu. The likely hood of dying young stands in stark contrast to my son's lust for life and adventure. Dying happens to us all, there's no denying that. But within that reality, if given a choice for my son? It would not be drowning in his own fluids. It would not be from his heart giving out as a young man. It would be after meeting his grandchildren and living a long, happy life. A life where he could choose independence from his parents, and where his body doesn't give out from lack of vitality, but from many, many years of use. We struggle with strength. As my son grows, his weight makes it difficult for transfers... to the toilet, to the bed, to an airplane seat for travel. He has so many dreams to go places, and I agonize over the day when his doctors tell us he must have rods fused to his spine to maintain his breathing capacity. With that operation will go his ability to hop on a plane and visit family. With each procedure he is likely to become more isolated from his peers. My social boy who loves to interact with people of all ages becomes more and more alone.

My son's type of Duchenne is rare. There can be no hope for him if a drug found safe and effective and benefits a large portion of the Duchenne community cannot be approved. Blocking the progress of this drug's availability will dissuade researchers from continuing the search to help all Duchenne patients. It is maddening that after 50 years there is finally an effective medicine that helps stave off the inevitable decline of this vicious disease for a decent percentage of those effected, and it's progress is being stonewalled. It is simply unacceptable. It is unconscionable.