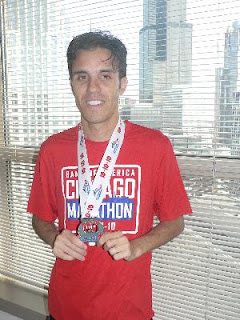 Ludovic Raymond is a co-worker who moved from Paris France to Buffalo NY. He defines himself as a ‘real’ runner since 2008. Running a marathon for a charity has been in the back of his mind, especially since the impact – in terms of fund raising – is much bigger. It is also a way to give something back to running, which has brought so much to him in the past few years. His wife, who already pushed him into running and has experience working with young people whose mobility is limited, asked him ‘why aren’t you running for a charity?’ His answer was simple, "yes but I have to do it for Christine and her son".
Ludovic and I sit next to each other in the office. I am always interested to hear of Ludovic’s successes as a marathon runner. I knew he ran the Chicago marathon. Ludovic’s passion is running marathons. I’m always impressed by anyone who has the dicisipline to train and run a marathon. It is truly an accomplishment.
One day I overheard Ludovic say that he had entered the lottery to run in the NYC ING marathon. A few weeks later I asked him if he got into the Lottery, he said no, but had another Lottery chance to enter and was waiting the result. I said; “If you really want to run the NYC ING marathon to let me know. Parent Project Muscular Dystrophy is one of the charities with open spots for that marathon.”

I have served on the Board of Directors for Parent Project Muscular Dystrophy since 1999. I am very passionate about this organization’s mission and goals. My son was diagnosed with Duchenne Muscular Dystrophy on December 31, 1997. My son Jon will never be a marathon runner. Ludovic said "I’m a little nervous about the fundraising. I said “If you don’t make this lottery and still want to run, let me know.” “I will help you raise the money.”

We have combined our spirits and our passions to raise money to End Duchenne., Ludovic has entered to run the NYC ING Marathon under Run For Our Sons. I would like to take this opportunity to introduce you to my son Jon, who was diagnosed at 4 with Duchenne. Jon is almost 18, and still mobile, but will begin his freshman year of college using a power wheelchair. He plans on pursueing a degree in Biology. He has received his Eagle Scout Rank in the boy scouts. During his senior year in High School he participated in Model UN, the 1511 Rolling Thunder FIRST Robotics team. In addition Jon’s favorite rock and roll band is AC/DC..

Your support will raise the needed funds for future therapies and clinical trials. Jon is particpating in the Ataluren drug trial at the University of Utah. We are hoping that this drug will soon be approved by the FDA. This drug will help slow the progression of Duchenne which will allow a better and longer quality of life. Jon is also participating in a trial at the University of Gainesville on a new MRI that can read muscle, which we hope will aid in analyzing the duchenne progession without the need for a biopsy. 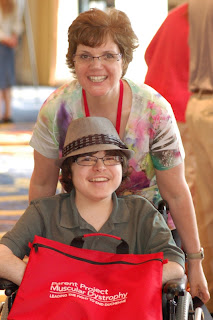 When Jon was diagnosed in 1997 there were 4 clinical trials for Duchenne Muscular Dystrophy. There are now 54 in the pipeline. However, the progression of Duchenne is very specific to the patient and also to the mutation that the patient has. The progression is very individualized. A 17 year old like my son could may be doing very well, but a 14 year old might not be able to walk or feed himself; by 20 they may have lost their life.
With your help we will: “Never underestimate the power of dreams and the influence of the human spirit. We are all the same in this notion: The potential for greatness lives within each of us.” ~Wilma Rudolph
Please make a donation:
http://www.parentprojectmd.org/goto/Ludovic-Raymond