How I became a runner 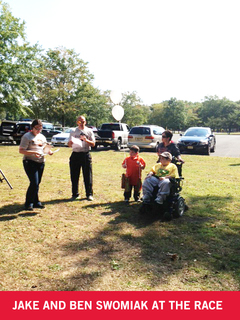 I ran the 6th Annual Friends and Neighbors in Action 5k in Monroe Township, New Jersey on September 22nd.  The race supported Jake and Ben Swomiak, brothers with Duchenne, and Parent Project Muscular Dystrophy. This was my first PPMD race (and I should add that I finished 2ndin my age group; getting old has its benefits)! My professional career and my running life have almost always affected and supported one another. Although I didn't start running until I was 30, which was the same time I began to take my career seriously. No coincidence.

I was always an athlete, but I hated to run. I was the catcher when I played softball and the goalkeeper in soccer simply so I could avoid running. But as an adult I was constantly searching for my "grown-up sport." I played a little tennis, tried golf, and even joined a bowling league. It wasn't until I decided to make a career change and enrolled in a certificate program that I also stumbled on the right new sport.

The certificate was in event marketing offered by New York University's School of Continuing and Professional Studies. My first classes was "Events Public Relations" taught by a woman who at the time also served as Vice President of Public Relations for New York Road Runners. Most of the materials she used in class were from the NYC Marathon. I kept thinking "I could do that!" even though a lap around the soccer field was as close as I'd come to long run at that point.  Thankfully, one of the class' guest speakers came to talk about the (then) Manufacturers Hanover Corporate Challenge and helped me set a more realistic initial goal.

It was spring 1995 and I worked in a fairly dysfunctional sales office for a company that will remain nameless here.  When I heard about the great team-building benefits of the Corporate Challenge I thought it might be a good way to try out this sport of running and put an end to office politics too!

The real inspiration however behind my undertaking this 3.5 mile adventure (because I always feel it's best to give proper credit) was my mom. About 10 years earlier, at age 58, my mother was on her company's Corporate Challenge team. This was big deal. My mom was not an athlete. The thought that she had done it motivated me. I was the athlete. I could certainly do this. And I did.  My first race ever!

A year later I had my certificate in event marketing and 18 months after that I did the impossible. I finished the New York City Marathon. By then I was the special events director for Bergen County's United Way and raised over $3,000 for that organization through the marathon – I had successfully started my fundraising career and found a sport for grown-ups. They both became my passion. Running helps me stay focused and disciplined which obviously helps my work and I have found that raising money for a good cause is the only way I can stay on track when training for a marathon.

Every runner has a story about how they got started and what keeps them going – what’s yours?

Way to go, Andrew! It does become addicting. Most runners I know are always looking for the next challenge.  Keeping up with the kids is sometimes challenge enough – and the perfect motivator!   Thanks for sharing.  Hope to see you at a RFOS race soon.

While I won't be doing a marathon any time soon, I did take up running a number of years ago, probably close to the time when we first got pregnant.  Previously I had been a smoker and while I wasn't overweight, I wasn't in good shape either.  I'd promised Mandy (my wife) that I'd quit before we tried to get pregnant... we figured me going through nicotine withdrawal and her with pregnancy hormones probably wasn't the best idea.

I started running occasionally, lucky to run for than a few minutes without having to stop and walk.  I've never taken it really seriously, and my schedule doesn't allow me to train for a full marathon, but I recently decided I wanted to step up my from my regular 10K to a half marathon.  I'm getting pretty close and it shouldn't be long before I'll be able to.  With one of our "Children's Wish" wishes, we plan to take the kids to Disney World, and I'd really like to plan that trip to line up with a Run For Our Sons Event there and do the 1/2.

Running has become a way for me to ensure I am in shape and can meet the physical demands of our children in the years to come.