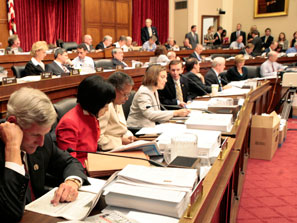 Progress! Yesterday the House Energy & Commerce Subcommittee on Health voted via unanimous voice vote to advance H.R. 594, the Paul D. Wellstone Muscular Dystrophy Community Assistance, Research and Education Amendments of 2014. This action moves the bill one step closer to consideration and hopefully passage by the full House of Representatives. We will then need to advocate for action on the Senate side.

PPMD has championed for co-sponsors for more than a year and to date the bill is cosponsored by more than 100 members of the House of Representatives!

What Does This Mean?

The bill will now move on to the full Energy and Commerce committee and then will hopefully move to the full House for a vote. Sponsors of the legislation are hopeful that the House can act on the bill before Congress adjourns for the August recess, requiring only action by the Senate in the fall for the amendments to become law.

Stay tuned for continued updates and again thank you for all of your hard work!

Great news out of D.C.! Following months of meetings and negotiations, a key House committee will be marking up (debating) H.R. 594, the Muscular Dystrophy CARE Act Amendments of 2014, legislation PPMD has championed for more than a year and that is cosponsored by more than 100 members of the House of Representatives.

The legislation – a focal point of the past two PPMD Advocacy Conferences – will update the landmark MD-CARE Act, first signed into law in 2001 and updated in 2008. The updated legislation keeps pace with the clinical, research, and public health needs of today. For example, the amendments will:

What the Markup Means

The bill will be marked up by the House Energy & Commerce Subcommittee on Health on Thursday afternoon. A mark up is where committee members debate or amend proposed legislation.

Once the bill clears this subcommittee, it will then move to the full committee and then to the full House. Sponsors of the legislation are hopeful that the House can act on the bill before Congress adjourns for the August recess, requiring only action by the Senate in the fall for the amendments to become law.

The subcommittee markup is a significant step forward, one that would not be possible absent our strong bipartisan support and cosponsors. Great work to all our advocates!

PPMD appreciates the work of many offices, particularly that of our sponsors – Rep. Michael Burgess of Texas and Eliot Engel of New York – that has gotten us to this month.

We encourage advocates to continue pushing for additional cosponsors of the bill, particularly members of the Energy & Commerce Committee. We must continue to add member support for the legislation.

Thank you all for your hard work!