This spring brings news of progress to the Duchenne community as Sarepta engages in talks with the Food and Drug Association (FDA) to determine if they agency will review an application for accelerated approval for the exon 51 skipping drug eteplirsen and releases its 74 month data showing positive results. At the same time GlaxoSmithKline is announcing promising results from the phase IIb study of its exon 51 skipping drug drisapersen, and PTC Therapeutics is preparing to begin its Phase III study of Ataluren, designed to address premature stop  mutations in the dystrophin gene.

In addition to these drugs that have been in the clinical testing phase for several years now, other drug candidates  in the pipeline now are starting to transition from the laboratory to clinical testing. Last year PPMD contributed $100,000 to the development of HT-100 (halofuginone) for Duchenne. This is a drug that may help slow the fibrosis, or scarring, that occurs when muscle tissues is lost. On Friday, Halo, the company developing the drug, announced that it has received FDA approval to begin a phase 1b/2a (safety and efficacy) study in 30 boys and young men (ages 6-20) at five sites in the US. 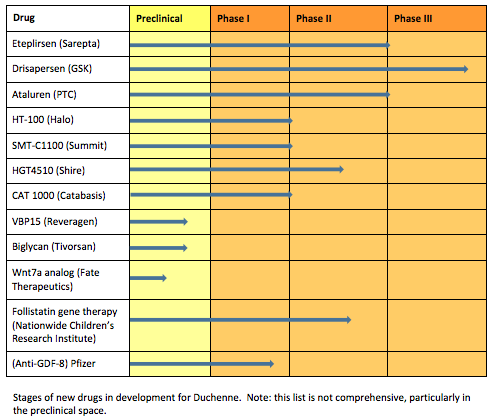 Other projects we hope to see transition to clinical testing in Duchenne in the near future include Summit PLC’s utrophin upregulator (SMT-C1100), which was reformulated with a $250,000 contribution from PPMD, and Pfizer’s myostatin blocking drug (recombinant human anti-GDF-8 monoclonal antibody). And, although Shire has been largely silent about the muscle growth pathway regulating drug it acquired from Acceleron, (HGT4510 formerly ACE-031--currently discontinued due to concerns about nose bleeds in the Phase II study in Duchenne), we should remain optimistic that the company is working diligently to determine if these issues can be addressed.

Following these drugs, we may see in the clinic as early as next year Tivorsan’s biglycan,which concentrates utrophin at the cell membrane. PPMD contributed over $500,000 to the development of this drug and we are please to report that the company has met its first two project milestones. Other preclinical drug candidates to watch include Fate Therapeutic’s Wnt7a-based drug, which may help stimulate stem cells within the muscle, and with support from PPMD, will undergo review by TREAT NMD’s Advisory Committee on Therapeutics (TACT) at the end of April.  Also progressing is Milo Biotechnology’s follistatin gene therapy approach, currently in phase I/II testing at Nationwide Children’s Research Institute for Becker muscular dystrophy with $600,000 in support from PPMD.  At the same time Catabasis and Reveragen continue to develop drugs designed to replace corticosteroids, ideally capturing the positive effects with less of the undesirable side effects.  The Catabasis drug (CAT-1000) is in phase I testing in health volunteers and the ReveraGen drug (VBP15)is in preclinical development with support from the National Institute’s of Health Therapeutics for Rare and Neglected Diseases (TRND) program.

And as work on new drugs continues, PPMD has funded two promising clinical trials to test approved drugs, including $750,000 for tadalafil (Cialis) at Cedars Sinai in Los Angeles, and $80,000 for eplerenone at Nationwide Children’s Research Institute. The former may restore normal blood flow to muscles during contraction (which is interuppted in Duchenne) and the latter may improve both skeletal muscle and cardiac muscle health.

As these promising prospects for treatment continue to move forward, in addition to funding drug development directly, at PPMD we have been working behind-the-scenes to make sure that drug developers can plan for and recruit for trials as efficiently as possible, putting in place such resources as a patient registry, and funding the development of biomarkers,  new clinical endpoints, and trial participant travel costs. More recently we have worked with a Johns Hopkins economist to conduct the first rigorous survey on benefit/risk in Duchenne muscular dystrophy and we have done intensive interviews with drug development companies to better understand regulatory hurdles from their standpoint.

What has become increasingly clear to us over the  years is that drug development is a complicated ecosystem:  consistent care across centers, valid regulatory strategies, clinical infrastructure (tools, techniques and services), current natural history data, availability of biomarkers and an understanding of the socio-economic burden of disease are just a few of the things that can impact the likelihood of success for new drugs. Although we put significant dollars directly into development efforts for particular drugs, we know that this strategy alone will never move the needle. We have to work to enable the drug development efforts of the whole field in a holistic manner. Thank you to everyone who has helped contribute to these efforts!

I had corresponded with Dr Ruegg earlier and he said the PPMD funding was for preclinical mdx work. I am hoping he would present data at the convention to proceed further.

Sorry--that list isn't comprehensive.  There are probably twice that many additional things, particularly in the preclinical space, that could be added and I have a more comprehensive version that I work from internally.  We just wanted to hit the highlights.  The tamoxifen results are certainly intriguing but we need further proof-of-concept data before moving that drug into trials--but that is what Dr. Ruegg is doing with the PPMD funding.

Thanks Sharon. I didn't see its mention in your blog, hence the q.

Hi Amit:  Pat Furlong and Bob McDonald (Board Chair) and I will all be at the MDA conference next week.  PPMD is already funding the tamoxifen project ($100K), along with UPPMD.

Thanks Sharon.
Do you have any thoughts about funding Tamoxifen? I believe Dr Ruegg will be at the MDA convention next week looking for funding for clinical trial. Is PPMD attending?