As I was preparing for this conversation, I realized that a lot of time is spent focusing on my son. As my daughter so aptly put it a couple of months ago “Hey, Mom, you have another kid you know.”  At 21, my daughter is moving into adulthood.  One of my greatest teachers was my own Mother. My Mother passed away in 1999 when my daughter was 8 years old.   As I look forward to my daughter’s future, and she becomes her own person, I wish she had a chance to really get know my own mother and learn some of my mother’s lessons first hand.  They are really inspiring and independent messages.

A.     You never know how strong you are until being strong is the only choice you have.

One of the most vivid memories I have is the day my Mother told my father to move out. I was in elementary school.  My parents’ relationship was not a Norman Rockwell painting. My father owned a pool hall and loved to gamble. He didn’t think women should go college or have jobs. He believed women should get married have babies and stay home. My mother got a job as a historical librarian and had a career that she loved and was renowned for her in depth knowledge of Manchester NH.  When I was in high school my father developed inoperable lung cancer.  My mother asked my father to move back home so we could care for him.  One of the last conversations I had with my Dad was that he told me was that my mother had convinced him that I should go to college and get my degree.

My mother had courage and strength to separate from my father, in the late 60’s when it wasn’t accepted.  My mother decided to pursue a career that she loved and was passionate about, against her husband’s wishes. My father later told me that he was pretty proud of her. My mother showed compassion toward my father. My father could make her completely crazy with his get rich schemes and some of his dumb decisions. In the end they both showed me that even though they didn’t live together they both deeply cared for each other. My parents ultimately cared about each other.  They both had inner strength to look past their differences and allow one to care for the other during the difficult times.

My mother had me late in life. She was 40 when I was born. She suffered severe post-partum depression and was hospitalized in a mental institution for a few months. There she suffered electric shock treatments and was put in isolation. Techniques, to treat post-partum depression back then were in their infancy. When I asked her how she managed; she said that she recited literary poems out loud to keep her mind active; with the recitation she could keep the demons at bay. In doing so she never gave up trying to get out the fog.  She was released after a few months, fully recovered from the post-partum depression. When my son was diagnosed with Duchenne, it was my mother that said:  “Don’t be afraid to fail, be afraid not to try and never give up.” Doctor’s may not know everything and it’s OK to question them and seek other opinions.   You may not find a true cure, but you can provide a much better quality of life then they are predicting.  Keep searching and researching.   Do what you think is right.  Now when, the doctor tells me how well my son is doing after a check up, I hear my mother’s voice in my head saying. “You never gave up.”

My mother’s insight was coming from a place of insecurity.  Her own family didn’t think she was that smart and didn’t think that she would amount to much. She proved them wrong when she was eulogized in the Manchester Union Leader and in the Boston Globe for being one of the most respected historical librarians in New England.    My mother always emphasized that milestones in a daughter’s life should be celebrated and she should be made to feel special.  I have always tried to celebrate the milestone in my daughter’s life. Girls need extra support and validation that they are OK sometimes.  My daughter has two favorite memories.  The first one was on her 13th birthday. We spent her birthday weekend in New York City with her aunt and cousin.  We had a great time with dining, shopping and seeing the Lion King.  The other memory she has is when we went looking at colleges in New England.  We stayed the night with one of my best friends and sorority sister from college. My daughter loved hearing about our bad dates, boyfriends and fun antics we had during college.

There are many life lessons that I learned from my mother.  However, I think that if I impart these three lessons to my own daughter she will end up with an indomitable spirit that will allow her to ride life’s roller coaster. 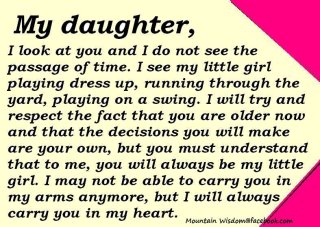