I'm going to attempt to write an update on yesterday's marathon. I say attempt because I am an emotional mess today. I think the last year has finally caught up to me. I spent all of last year putting all my efforts into training and fund raising for it. It feels so weird to have it behind me now. I almost don't know what to do with myself. Although right now, my body isn't all too capable of doing much of anything. LOL!!

The first thing I want to do is thank everyone who has encouraged me through this process. Whether it was just a "go get 'em" or a donation, I can't tell you how much it meant to me.

The trip to Florida definitely didn't go as planned. Who would have thought we'd be battling sub-freezing temperatures. So much for "sunny" Florida and average highs of 72 in January. We arrived on Wednesday night to some pretty cool temps and went straight to the hotel where we met up with several other Duchenne families. It's always so good to get together with them.

On Thursday we got up bright and early and hit Hollywood Studios right when they opened. During past trips, we've always left this one for last and then end up missing most of it. This time the boys got to see the Indian Jones Stunt Show and the Lights, Motor, Action show. They loved them both. And we all agreed that Toy Story Mania is our favorite ride there. I was so happy to hear that there is a Wii game. That's a definite addition coming to our growing game collection. After we finished up there in the early afternoon and picked our race packets at the expo, we headed over to the Magic Kingdom for a bit. We only had time for a few rides before dinner, but Sam finally got to ride Space Mountain. With his shoes on, he just made the 44" height requirement. Thank you growth hormones for that 1" he's been given in the last 3 months. I got to sit behind Sam for this ride and was almost brought to tears listening to him squeal and scream for the entire ride. He loved it so much. I think it was the highlight of his trip. After that we rode Buzz Lightyear then headed off to dinner at The Wave at The Contemporary where we met about 40-50 of our PPMD family. It was a long, noisy, great dinner. All the kids sat at the kids tables, so the adults were able to chat it up. Thank you Jenny for organizing our dinner.

On Friday, we decided to sleep in a bit since the kids had their races at 11. They were all very excited about getting to run, too. The first to run were the boys. They both participated in the 400m kids run. It was once again all I could do to hold back the tears when I saw Sam running at full speed towards the finish line. He was the last to finish, but was determined to do it. I was standing near the finish taking pictures and yelling "Go Sam". Everyone around me also started yelling for him, too. It was just such an amazing feeling. He was so tired afterward, but very proud of himself. Jake also did a great job with his run. We'll have him in the half marathon when he's old enough, I'm sure. Abigail then had her 1 mile race. She wore my Run For Our Sons shirt for it and stood out very nicely in it. Her time was 9:46. She's already talking about wanting to do the half marathon next year. 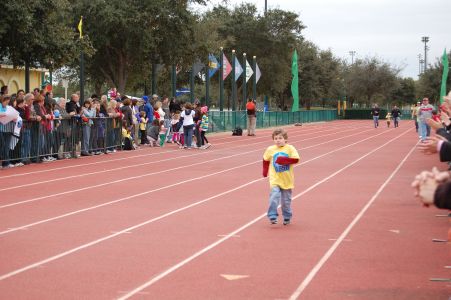 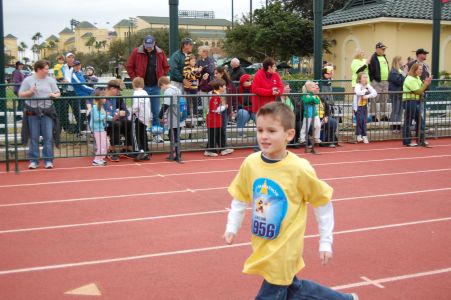 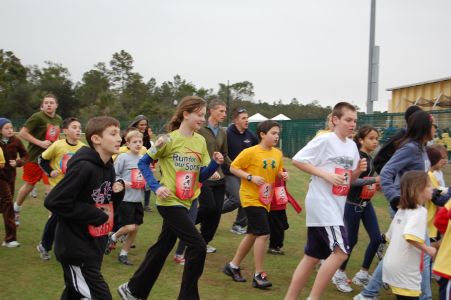 After the races, we went back to Magic Kingdom. The weather had actually been pretty nice up to this point, but then it started drizzling. Weatherman hadn't predicted that, so I didn't have our ponchos with us. But we braved it while we had to. When we go to MK, we grabbed some lunch. Luckily it stopped the rain/drizzle while we were eating. We then hit the rides the kids wanted. Not sure if it's good or not that they don't want to ride all the "boring" rides like Small World, but it sure makes for a quick trip through a park. We rode Space Mountain a few more times, plus Pirates, Buzz, Big Thunder Mountain, Haunted Mansion, and the Speedway.

Friday night was also the PPMD Pasta Dinner. We filled up on pasta and once again got to hang with all the PPMD families.

Saturday morning was the half marathon (13.1 miles), which Kris was participating in. It was truly a very nasty day. Freezing temperatures, sleet and rain. I felt so badly for all our runners/walkers out in that mess. It's so great that they all toughed it out for our boys. Kris' finish time was 3:36:34.

After Kris finished and we got him back to the hotel, the kids and I headed over to Animal Kingdom. The weather was not getting any warmer, but the rain had at least stopped. There wasn't much we wanted to ride there, but they were good rides. First was Expedition Everest. This was another first for Sam. I think he loved it just as much as Space Mountain. After that we rode Dinosaur, then headed back for another ride on Everest. Those done, we headed over to Epcot. First was Spaceship Earth, then Test Track...another one of the kids favorites. We then discovered that Sam was tall enough for Mission Space. I had been thinking that it was 48" ride, but it was just 44". Sam also loved this one. We then went over to Soarin' and finished up with hot chocolate. Once done there, we met Kris over at Planet Hollywood at Downtown Disney for some much needed dinner. Unfortunately, dinner and the ride back to the hotel took forever. I didn't get to bed until after 11 and I had to be up by 3am the next morning.

Sunday morning came way too soon. I barely slept b/c I was so nervous/anxious. I ended up getting up at 2:40 when Sam (who was sleeping with me) rolled over and slugged me. Turned out to be a good thing because I was able to do some stretching before heading out. I met a few other runners at the monorail stop at our hotel. It was so cold outside. The low that day was 29º. I think the windchill was around 20. We timed it all just right with getting to the start line just a few minutes before the race began (5:40). Probably could have used a little more stretching, but oh well.

The races started off pretty good for me. It began with a route through Epcot. I was keeping a good 10:00/mile or less pace. I had taken off my sweatshirt before the race began, but kept the sweatpants on. Good decision. I also had an oh so lovely black hat that kept my head and ears pretty warm. Gloves were another story. Around mile 5 or so, I took one off so I could get a Clif Shot Block out of my pouch I was wearing....and I dropped it at some point. My fingers were already partially numb at this point. After that it was all down hill. The cold was really getting to me. But my legs (and shin) felt great. LOL!! I was also feeling the effects of not running enough in that last month or so. I was hurting. By the halfway point, I gave up on running and just walked. I really regret this now. It truly is so much easier to just run than to walk. I was feeling very defeated at this point. It was all I could do to keep going. I had to keep thinking of Sam and of how much I would be letting him and all the other boys down if I quit. I cried a few times and I prayed a lot. I just had to finish.

At the beginning of the race, I was thinking my time would be about 4½ to 5 hours. I'm a little disappointed that I didn't make that, but my finish of 5:23:57 really isn't that bad. Am I going to do it again? If you had asked me yesterday, the answer was a definite no. I'm actually waffling now. I will keep running. Half-marathons are very doable. We'll just have to wait and see if my sanity takes flight again and I sign up for full.

The rest of the trip was pretty uneventful. Got back to the hotel. Got my shower. Ate lunch, then headed to the airport for a 6pm flight home. We finally made it back to the house right at 10pm.

Again, thank you to everyone for your support, encouragement, and prayers. It's hard to believe I actually did it. 26.2!!!! You can bet that sticker is going on my rear car window. ;o)~

Comment by cheryl cliff on January 11, 2010 at 8:00pm
Laurie, you did a BEAUTIFUL JOB!! Thank you so much for going through all the training and pain to run for all the boys. Sam no doubt is exceptionally proud of his efforts and yours. Someday he will be older and understand more about what you've given him with this race, it's quite a special gift from a special mom. xox

Comment by Jennifer Shumsky on January 11, 2010 at 7:29pm
You are and continue to be an inspiration to me Laurie!

Comment by Deb Robins on January 11, 2010 at 6:57pm
I am in Awe! Well done you! I hope my eldest unaffected son keeps his new year resolution to do the Florida marathon next year. I will cut and paste your comments to encourage him!