Wanting to Help You Make a Difference!

Writing you a quick note - can't wait to see everyone in Orlando! I'll be attending the Pasta Dinner on Friday & running the 5k Saturday!

I can't express how greatful I am of the Parent Project MD communtiy. You've all changed my life! Looking forward to meeting new faces. If your family is interested in coming to one of my races VIP style contact me via media@shearacing.com and chat with me while at Disney!

Being the founder of an organization that has people in different parts of the country you’ve never met is a little weird for me. In spite of that, I feel very inspired by these women who have all in their own way found what drives them to…

“We had a fantastic season. We won the Long Beach Grand Prix in the Touring Car division, and I made history becoming the first woman to win a Pirelli World Challenge Touring Car race and now just the third to ever win a race at Long Beach. Do I wish…

Vote for our favorite Pirelli World Challenge lifestyle photo. A Simpson helmet signed by all of the Pirelli World Challenge drivers will be awarded to the photographer with the top ranked image in the Lifestyle category and the Racing category. But here's the twist! Photographer, Chris Schutze offered if his photo wins he'll donate the signed helmet to the Shea Racing Duchenne muscular dystrophy charity efforts for raffle!

VOTE this photo! Then at the end of the season we'll… 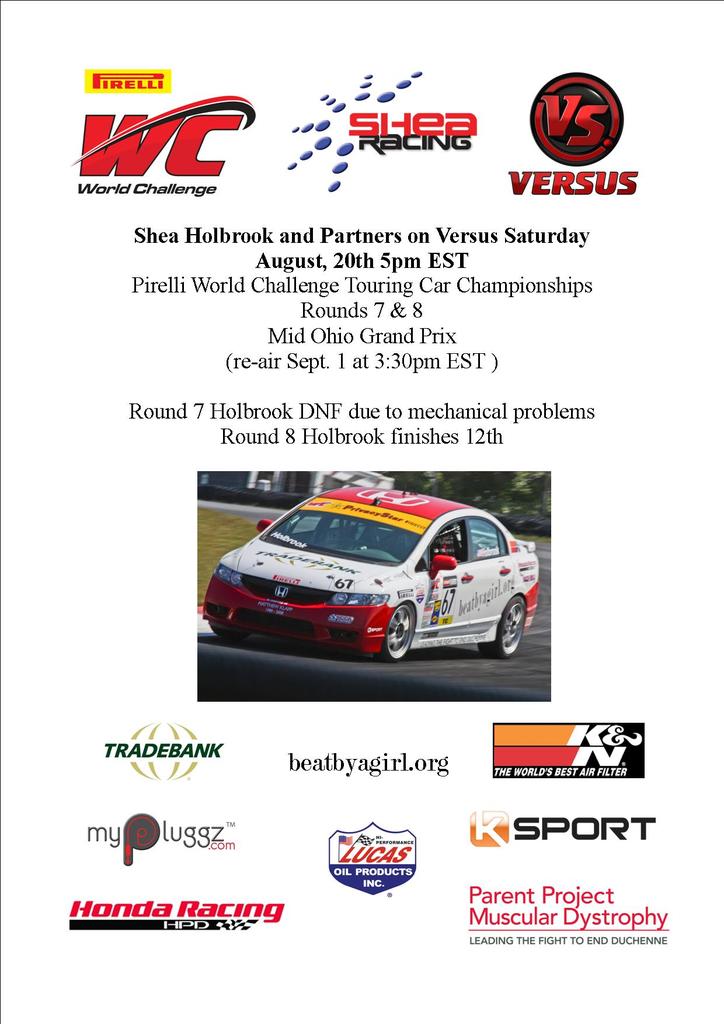 The Driven fan club was established for fans to truly be a part of Shea’s professional racing career. By joining Driven you can actually help keep Shea in the race seat and be a part of her professional career into stardom. It’s obvious that fans play a large role in the success of an athlete, and Shea wants to give back to you.

“I’ve been blessed to have…

In a single moment Shea Holbrook's entire life was altered forever. She went from being on a post race high, to being overcome with the ultimate sense of euphoria with these words, "Shea, you won the Grand Prix of Long Beach - not many people can say that." …
Continue

Racing to Her Dream - Her Campus UCF

Shea Holbrook is a smart, bubbly girl you may have seen roaming campus through out the semester. Although she may come off as a typical UCF student, Shea is actually a successful race car driver. For Shea, racing isn't just an adrenaline rush, she races for a purpose. She is easily somebody each and every one of us can look up to for her dedication and passion. Her enthusiasm for racing and giving back is something that is truly… Continue

"My goal is to be like Danica Patrick," Holbrook said. "If I could ever get to some type of celebrity status in my racing career, I could help raise money for Duchenne muscular…

We're back! Shea Racing fighting Duchenne leading up to the Grand Prix of St. Petersburg

My name is Shea Holbrook, 20 of Groveland, FL and on March 26-27, 2011 I take the grid for my second season professional racing with the Sports Car Club of America (SCCA) Pro Racing World Challenge Series for the Grand Prix of St. Petersburg, FL. Join me in the fight against Duchenne Muscular Dystrophy leading up to the Grand Prix of St. Petersburg which races alongside the IZOD IndyCar Series and is televised…

Shea Racing Takes 6th in Championship & Raises Over $14,000 for PPMD

My name is Shea Holbrook, 20 of Groveland, FL and on July 3rd the Dick Ide Honda Civic Si, with me behind the wheel, will take the grid at The Grand Prix of Watkins Glen with World Challenge alongside the Indy Racing League.


It is our goal to raise $10,000.00 by July 3rd in a benefit for Parent Project Muscular Dystrophy and we are asking you to PLEASE help us promote to raise awareness and funds.


Supporting the fight against Muscular Dystrophy was an easy choice…