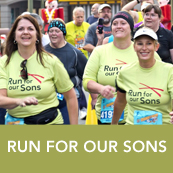 Join Run For Our Sons at the most magical race weekend on Earth! With nearly 200 runners, this is our largest race team of the year and a great opportunity to connect with old friends and make new ones as we go the distance to end Duchenne. A team party, finish line tent celebrations and much more are waiting for you January 3rd-7th, 2018 at the Walt Disney World® Resort!